Alice is the main protagonist of the video game American McGee's Alice and the series, which is an adaptation of the classic Lewis Carroll novel, Alice's Adventures in Wonderland.

Alice is an independent, often cold and sarcastic young woman with a troubled past which led to spending ten years in a catatonic state in Rutledge Asylum.

She was voiced by Susie Brann, and Yuko Kobayashi in Japanese, whom also voiced Nico Robin in One Piece.

At a young age, following her second adventure, she was orphaned when her parents and older sister, Lizzie, were burned alive in a house fire. Distraught, she fell into a catatonic state after a failed suicide attempt and was condemned to Rutledge Asylum for treatment. There she remained for roughly 10 years (as alluded to in the game's complementary casebook), faced with her own survivor's guilt and mistreatment by other patients at Rutledge.

Alice Liddell was born in 1856 to Arthur and Mrs. Liddell, and was the younger sister to Elizabeth Liddell, and was born and raised in England with her family. Alice held a hyperactive and creative imagination, often creating world named "Wonderland", but also became skilled with the piano by her mother and her nanny, Nan Sharpe. Alice's imagination allowed her to go Wonderland within her dreams, where she met the Mad Hatter and the Red Queen. In 1863, a house fire was caused by Dr. Angus Bumby, which killed Alice's family despite her surviving. It's later revealed by Dr. Bumby was obsessed with Elizabeth, who rejected his advances until he assaulted and murdered her the night of the house fire. Alice saw Dr. Bumby, but would think it was someone else and would repress the memory for years, and Bumby started the fire to cover his tracks.

Alice was left with first degree burns, and was taken to the Littlemore Infirmary, and some outlets accused Alice of causing the house fire. After a year of treatment, Alice was left traumatized from the incident and fell into a catatonic state, repressing her memories of the figure who burned down her home. Alice was then transferred to Rutledge Asylum in 1864 to handle her symptoms, and would document her mental state while under the care of Doctor Heironymous Q. Wilson. Alice would be exposed to numerous methods to remove her illness, such as going through shock therapy, leeches, blood-letting, solitary confinement, and sensory deprivation. All of the methods failed, however, and she would slowly begin to recover by 1874.

One night, the White Rabbit comes to her and tells her she must return to Wonderland to undo the wicked deformities brought on by the dictatorship of the malevolent Queen of Hearts. It is revealed later that, by overthrowing the Queen of Hearts, Alice will not only save Wonderland, but her own sanity as well. This is evident when, in the aftermath of her victory, Wonderland and its inhabitants can be seen reverting to their original forms and Alice leaving the sunny gates of Rutledge Asylum accompanied by her cat and carrying a packed suitcase.

In Madness Returns, Alice has fallen on hard times. Now living in an orphanage in Victorian London, Alice is under the care of Doctor Angus Bumby, a psychiatrist who uses hypnotism to help his patients forget their haunting memories. Believing the fire which killed her family was no accident, Alice investigates it whilst having hallucinations of Wonderland once again corrupted, now by the Infernal Train and the Ruin monsters. She eventually learns her psychiatrist, Dr. Bumby, was responsible for burning down her home and raped her sister beforehand. The furious Alice confronts him at Moorgate station, where she retrieves her sister's bedroom key and then mercilessly pushes Bumby into the path of an oncoming train, which kills him.

Alice has two character designs in Madness Returns: her London self, where she looks ill and downtrodden, and her Wonderland self, where she wears her iconic blue and white dress and looks completely healthy. It is revealed in The Art of Alice: Madness Returns that re-designing Alice was one of the hardest parts of creating the game, the creative staff relying on old artwork from the first game and fanart to find the right design for Alice. Alice wears numerous dresses in the game, with several more being available as downloadable content on the Playstation 3 and Xbox 360.

In Wonderland, Alice shows a violent streak when fighting enemies, using her trademark Vorpal Blade in combat. She also gains other unique weapons throughout both games based on childhood toys and ordinary household objects.

In both games, Alice can gain brief transformations by consuming objects in-game, such as the Eat-Me-cake which turns her into a giant and the Rage-box which turns her into a demon. Although in Madness Returns she has a singular transformation called Hysteria Mode which is available to use when the player's health is at a very low level. Alice is also capable of shrinking down to size by drinking a potion, and can stay small as long as she likes.

Alice has no powers while in reality, but she is shown to be intelligent and creative, and is capable of playing the piano. 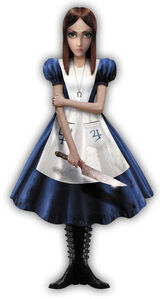