Alice is a heroic treasure hunter who works under contracts across the world, opposite her friendly rival Dorothy. Her mother Lewis, also an adventurer, has gone missing while looking for the legendary treasure “The Queen's Gate.” Alice travels to the ruins by airship and while packing her favorite sweets, she sends her underlings ahead. She found the treasure and when she opened it, a battle across the space-time started.

Alice wears a black short dress with brown wing-like attachments on her back. She has two wing like attachments on each side of her head, and a black bat brooch attached to her bangs. She has a yellow and black striped whip that she hangs behind her like a tail. On her arms she has black armbands on the upper part of the arm and wears black gloves with brown leather on them. On her legs she has tight thigh-high boots and owl-like pieces near her feet. On her right leg she has a golden interlaced band and on her left thigh she has a small brown belt.

Very bright, Alice is highly knowledgeable about ancient civilizations, so much so that she has a PhD in the study. It’s her basic style to calmly enter after there’s no more danger or traps prepared for intruders. She appears to be very adventurous, taking after her mother with this trait, as she likes to explore different areas.

She sports a highly customized pair of Mauser C96 and a whip as weapons. Also, because Alice is able to use the many OOPARTS (Out Of Place Artifacts) she brought from a lot of ruins, she has made it very tough for anyone to defeat her. Her tail is actually a whip, that can be attached to her lower back. 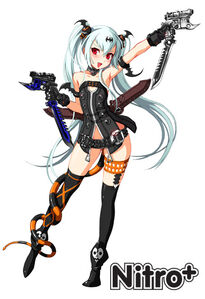 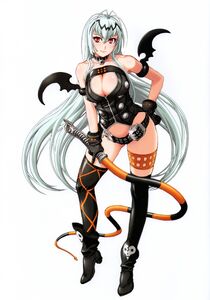