Getting to know her traveling companions, prayer, familiarizing herself with non-Christian prayers.

Save the world.
Undo the curse on Yuri.

Alice Elliot is the heroine of the video-game Shadow Hearts, she has a link to the divine that affords her holy powers and was trained as a exorcist by her father before he died. Alice is kind hearted and pure which strongly contrasts the games main hero, Yuri, who Alice soon develops a strong bond with.

Alice used to live with her father, a priest with the Catholic Church. One day Father Elliot was asked by the Vatican along with his friend Father James O' Flaherty to hunt down a warlock calling himself "Roger Bacon". The Elliot and O' Flaherty split up to cover more ground but Father Elliot still journeyed with his daughter in search of his prey. In 1913 in Rouen France Alice Elliot watched as her father was brutally killed by "Roger Bacon" as it turned out the warlock was after her and Father Elliot gave his life trying to give his daughter a chance to escape. Alice was apprehended by the Japanese military though she did not know what they wanted with her she freely went with them in order to escape her father's murderer.

In Autumn of that same year Alice was being transported via the Tran-Siberian Express from Europe to China. Alice overhears the guards in her cabin say that she will be given to a superior officer and transported to Japan once the train stops in Fengtian. As the guards question the significance to get the attention of their higher ups a sudden scream can be heard followed by another scream and another splat. Alice and the Japanese envoy see the British warlock, accompanied by a semi-transparent scythe-wielding mini-demon. The guards shot at the British warlock however his demon deflects each shot as the warlock casually strolls on towards his target. The demonic minion kills the guards and Alice recognizes Roger Bacon in a moment of shock and horror, as the warlock steps through their blood he politely smiles and states how glad he is that she remembered him. Just as Alice is cornered she and the warlock notice a young man behind him. Bacon's minion lunges for the young man with terrifying speed but is caught in his right where-upon the creature is crushed. Though the creature was killed it did manages to cut off the boys left hand before being caught. The boy casually picks his arms off the floor and lets it quickly reattach to his body, demonstrating that he is no ordinary human himself. As Alice tries to get away Bacon grabs her and uses a spell to put her to sleep. Alice falls unconscious and is taken carried off by the warlock. The young man quickly pursues the warlock to the top of the train but is soon overpowered by him. As Bacon is about to finish off the young man Alice's spiritual powers activate giving off a powerful holy light and stunning Roger Bacon. The young man takes advantage of the distraction and punches a whole in the warlock's face, but realizing he is overpowered jumps off the train before Bacon can heal his wound.

When Alice awakes she attempts to escape from her rather frightening savior but is ambushed by wild animals. The Rude Hero saves her but in an attempt to remain unnoticed by both the Rude Hero and animals Alice plays-possum. After defeating the beasts the man looks at he and briefly debates fondling her. Alice's wenches and the Rude Hero just tells to just drop the act and get up. Alice quickly rises and introduces herself, the Rude Hero introduces himself to as Yuri Hyuga. Yuri tells Alice he is a Harmonixer, a being with the power to fuse his physical body with the souls of monsters he's killed, he also mentions he sometimes hears a spiritual guide that tells him to do things and the voice had told him to take her train in the first place, further-more the voice had jut told him to keep protecting the her once they had gotten off. Alice thanks him and tells him she has powers herself. Yuri comments that his powers tend to make him a target for demons but her powers would do the same if not worse since hers were a natural anathema to the unholiest of them. The two quickly decide to travel together for both their sakes. As they journey across China and later Europe Yuri and Alice faces many supernatural foes and have many adventures.

Alice is kind-hearted and caring, she leaps at any chance she can to help any good-hearted person in trouble. Despite being raised by a member of the Catholic Church and her training as an Exorcist Alice is neither self-righteous nor inquisitive and only fights evil things that provoke a confrontation. She was educated in Christian holy rites, so during her trek across China she is eager to learn local Taoist and Buddhist customs as well to offer efficient localized prayers. Though she is pure of heart she is not overly naive but still willing to forgive anyone that shows signs of remorse for their evil deeds and almost never expresses any signs of anger. Alice often becomes melancholic when she thinks about her father, but never outright cries or dwells in the tragedy. She tries to help her team-mates whenever she can, not just with her powers but spiritually by offering words of comfort. One of her biggest concerns is Yuri who she grows very fond of and tries to looks for a way to free him from the burden of Malice his powers place upon him.

Alice has a link to the divine that allows her to manifest various holy powers. Most of her powers are used to cure, heal or enhances others however she does get two incredibly destructive powers that use the holy energy offensively; the first is called Blessed Light, which is a single target move that does considerable damage, the second is called Advent, which does massive damage all at once by calling down divine retribution. However regardless of Alice's capacity for offense, she is more useful as a healer and buffer of the party since few allies can heal and she is certainly the most adept healer of any playable character. 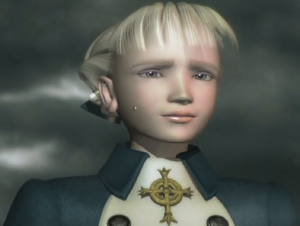 Alice mourns for Yuri as his soul is being consumed: Shadow Hearts 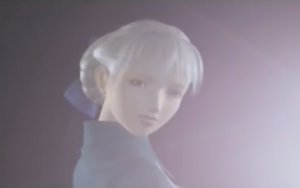 A brief flashback to Alice in Shaadow Hearts: Covenant 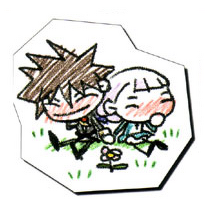 Save file sketch, Yuri and Alice