Help the other brawlers to defeat Naga (succeeded)

Alice Gehabich is one of main protagonists in the anime Bakugan Battle Brawlers. Alice's Guardian Bakugan is Hydranoid. She has an alter-ego of herself named Masquerade who was a major antagonist, she later redeems herself as Masquerade with her Hydranoid and she helped Dan to defeat Druman and Centorrior. She owns Hydranoid that Masquerade tells her that he is the same Alice wearing a mask to hide his true identity.

She became an supporting character from Bakugan New Vestroia, after the Bakugans are freed, she reunited with Hydranoid, she and Hydranoid destroyed Hades after Masquerade's ghost-like form appeared inside of this latter, but she was defeated by Shadow Prove who has MAC Spider as a replacement of Hades when she was accompanied by Chan Lee.

In season 4, she was seen as a photo mentioned by Marucho.

She was voiced by Mamiko Noto in the Japanese version, and by Emilie Barlow in the English dubbed version.

Alice is very beautiful & polite, often doing errands for others, and rarely chooses to bother others with her problems unless they ask her or if it is of the utmost importance to the task at hand for them. She and Shun Kazami are seen as the most of mature in the group. She hates causing trouble for her friends, and also dislikes it when there is conflict between them, because she wants the group to stay together. She can somewhat "read" through others' emotions, as shown in episode 28, when she was able to sense that something is wrong with Shun and after he said "No, nothing", she insisted that he tell them because she knew that Shun was lying.

She was one of the people who were suspected to be a spy for Masquerade along with Joe and Shun, but she was able to clear her name by helping Runo Misaki and Dan Kuso in a battle. Later, when Julie apologized to Shun about mistaking his grandfather for Hal-G and Dan blamed him about not telling them that he was in town, Alice was the first one to defend Shun.

If Alice were to brawl, she would probably be one of the best, due to her strategies. She is ranked number 2. The only problem is that she doesn't like fighting.

Dr. Michael Gehabichs lab in Russia was suspect by the group's Guardian Bakugan. In the lab, they learned through a video that he had been working with cross-dimension research to Vestroia. They also saw another video where they learned, much to their shock, that Michael transformed into a monster, Hal-G. With this, Alice became extremely worried about her grandfather, and hoped to save him.

One day, the group concluded that one of them was acting as a spy for Masquerade. The group's suspect focus undoubtedly turned to Alice. Alice was very saddened about it, and she ran away. Dan was worried about Alice and tried to find her to talk to her. This problem was eventually fixed when she helped Dan and Runo battle Nene, Shuji, and Akira.

At some points in time, Alice would just randomly disappear such as when Runo and Marucho went after Klaus after he lost Preyas, or when Christopher tried to help her.

When Masquerade was tested by Exedra he had to battle with an illusionary "Alice". He underestimated her lot, which caused him many troubles during the battle, but in the end, he managed to defeat her.

In episode 38, it was revealed that Alice was actually Masquerade. While visiting her grandpa, Alice was struck with a blast of negative energy created by Naga, which passed through Dr. Michael's dimension transporter. The negative energy turned her into Masquerade, and her grandfather into Hal-G. After Dan defeated him, he offered Masquerade to join the group, but just before they could shake hands, Masquerade took his mask off. His hair fell down, became longer and turned orange. As the wind blew in the messy hair locks, it revealed the face of a confused and frightened Alice. The Brawlers were more than shocked, but after Hal-G appeared and told them how he and his granddaughter fell under Naga's control; (because Alice couldn't remember anything) everything became clear. Alice blamed herself for what she had caused to her friends while being Masquerade and prepared a teleportation card, revealing her intentions of leaving The Brawlers' team. Dan, Runo, Marucho, Julie and Joe tried to comfort her and convince her not to leave (and almost succeeded), but then Shun commented how "smart" Masquerade was (he said: "Well, you proved one thing - Masquerade was smart and he knew where to find us because you were him!"). This caused Alice to start crying and activate her teleportation card, stating that she is leaving because of guilt for what she had done as Masquerade, which actually wasn't true. The Brawlers spent weeks searching for Alice, but they couldn't find her.

She later battled Klaus Von Hertzon to prove she isn't like Masquerade. even though she lost Kluas belived in her.

In episode 44, she heard Dan and decided to help him. With a little help from Klaus, she entered Vestroia and, transformed into Masquerade for the last time, saved Dan and Drago. The mask then shattered and Masquerade vanished away, leaving her body and entrusting all his Bakugan to her. She then regained her friendship with Shun and decided to continue to play Bakugan with the group.

When the Brawlers returned to Earth, she tagged with Klaus and Christopher and battled the Subterra/Haos hybrid Rabeeder. Using her "Trident of Doom" ability card, she managed to defeat Rabeeder, despite the fact that Hydranoid was unable to move.

Later, she found her grandfather and, not knowing that he was actually a transformed Hal-G who was trying to trick her, led him to Wavern - the guardian of the Infinity Core. After Hal-G revealed himself, she and Joe tried to make a proper strategy so that they could save Wavern, but they were quickly attacked by Alice's grandfather while Naga was battling Shun and Skyress, who tried to distract him so that they can give Alice, Joe and Wavern more time, but were easily defeated by the power of Naga's Silent Core. Hal-G used a magical nova to eliminate Alice and took Joe as a hostage, but Chan Lee appeared and kicked him away. Then, Chan tried to protect Wavern with her Fourtress, while Joe was trying to bring her back inside her ball-form state but he was unable to do it because Naga sent a special signal to Wavern's Infinity Core.

Although it's hardly shown, Hal-G "played" with Alice and Shun a little longer because the last time we saw them, Alice hit herself in a lamppost and Shun crushed into a building but they are later shown laying next to each other in the middle of the street, in a much worse condition than they were before, with Hal-G standing on top of Wardington Tower, laughing.

After her failure to protect Wavern, Chan helped Alice to stand up and recover from Hal-G's attacks. In the end of the episode, after all the Brawlers said "Goodbye!" to their Bakugan, Alice threw Hydranoid in the portal and watched as Shun's other Bakugan flew in it. In the Japanese version, as she says goodbye to Hydranoid, Masquerade's silhouette was seen in her shadow, indicating his presence inside of Alice

In episode 26, her Alpha Hydranoid had been un-petrified, but was in a bronze statue state in Prince Hydron's collection along with the other 4 hero Bakugan, excluding Drago

She appears in Freedom Run. Alice appears when Kato connects her with Runo Misaki and Julie Makimoto. She watches as her grandfather tests the portal to New Vestroia. Later, she watches as Julie sends Runo to New Vestroia. Alice also appears in Gate Crashers, sending Spectra Phantom and Gus Grav through the portal. She also lets Lync Volan stay at her house for the time being, but makes it clear that he is just there because he needs food and shelter. In Family Ties, Dan Kuso decides to take Alice, Runo, and Julie to New Vestroia after Dr. Gehabich finishes fixing the portal. But, unfortunately, only those with a gauntlet can enter.

When Mira Clay returned, she gave Alice a Darkus Gauntlet as a gift.

She and Chan Lee battled Shadow Prove in Shadow Attack. Alice was seen in a field outside of her home with her Darkus Alpha Hydranoid as she talked with him about missing New Vestroia. Then Shadow, the second Vexos she has met (coincidentally if she had met Gus she'll have met the Vexos that can perform a triple nod) runs in, pretending to be a werewolf, and demands that she battle him. Knowing that it will be hard to battle after becoming Masquerade, she runs away. Shadow is persistent, though; he chases her into the forest as she reflects on her past as Masquerade. Throughout her reflections, she is tempted by him to transform into him again to defeat Shadow Prove. Masquerade even says "You know you want to, Alice" to test her, proving her struggle to not change into him, but she shrugs it off and finally gets caught by Shadow (However, in the original version, Masquerade was telling her to stop running and fight).

Before he can do anything else, Chan Lee flies in and kicks Shadow, temporarily letting Alice thinks about brawling with him. After much encouragement from Hydranoid, she accepts the challenge. Alice struggled to keep her cool when she was battling because she thought that if she turned into Masquerade, she could lose herself in the process. But during the battle, Alice somehow connects with Masquerade, without transforming into him and she and manages to keep true to herself. With a very impressive combination of some of Hydranoid's moves she manages to destroy Shadow's most powerful Bakugan, his Guardian Darkus Hades, but Hydranoid was too tired from the battle which result their later loss against MAC Spider. Later, after Dr. Michael catches up with her, she notices that a shot from Darkus Fortress had destroyed both the lab and the Dimension Transporter, making it near impossible for Dan and the others to get back to Earth. Alice apologizes for the destruction and regrets her lack of strength in battle. It was harder for Alice to battle more than any of the Brawlers because of her fear to transform into Masquerade again and losing herself in the process, but it seems like this won't be an obstacle for her anymore.

She is later seen teleporting to Marucho's house and connecting with the brawlers on Vestal, warning them about Shadow's attack on her and asking them to watch over Runo and Julie, which, in her opinion, could be the Vexos's next targets.

In Payback! Lync Volan comes to Russia to warn Alice that King Zenoheld wants to destroy Earth along with Vestal. Lync throws his glove away with the hard drive in it after loses his battle against Prince Hydron. When Alice comes out looking Dr. Michael she finds the glove. She and Dr. Michael uncovered what it was and sent the data to the Resistance.

In All For One, Alice and her grandfather came to Marucho's house to trace a path back to the Mother Palace.

In the Japanese special ending, she is seen with Shun, Hydranoid and Ingram as they watch Marucho repair Bakugan Interspace. 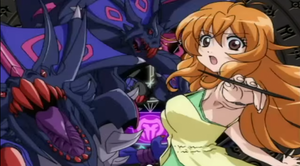 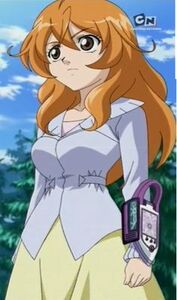 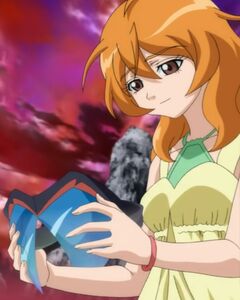 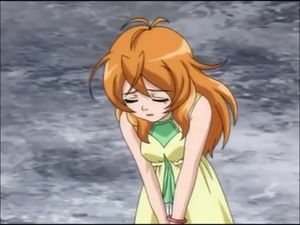 Alice apologizes to her friends for all the bad things she has done.
Add a photo to this gallery

Retrieved from "https://hero.fandom.com/wiki/Alice_Gehabich?oldid=2167024"
Community content is available under CC-BY-SA unless otherwise noted.