Gramma (by Cricket and Tilly)
Ma (by Bill)

Alice Delores "Gramma" Green is one of the main characters in the Disney television series Big City Greens.  She is the cranky, paternal grandmother of Cricket and Tilly, the mother of Bill, the mother-in law of Nancy, and the matriarch of the Green Family.

She is voiced by Artemis Pebdani.

Given her age, Alice has wrinkles throughout her body, and grey hair.  She shares the same yellow skin color.  Her head is square and her facial features (especially her mouth) are notably bild-like.  She is notably smaller in stature than Bill or most of the other adults in the series.  She has a prosthetic right leg.

Alice wears large, round eyeglasses and a long pink dress with a pearl necklace.  She wears pink house slippers and a hearing aid in her left ear.

Alice is a crankly, elderly woman who often wishies to due stuff on her own and often hestitate to try anything new.  She is however tough, and is not afriad to get into any fights.

Despite her differences with her family, she deeply cares for them, even if it means getting her into their numerous antics.

In "Gramma's License" Alice revealed that she use to have an interest in street racing, but is afraid of becoming useless after becoming afraid of failing her driving test to renew her license.

Prior to the events of the series, Alice was the only member of the Green Family who actually lived in the Big City.

In "Gramma's License", Alice revealed that she use to be a racer by the nickname "Hot Rod Alice" and that she had kept her license since the time she was a racer.  Following a collosion that required her to renew her license, Gramma reluctantly tried to practice driving in order to prove she was not useless.  Despite having thoughts of quitting, Alice eventually took the test and passed (albeit barely), and was able to renew her license (albeit restricted to local roads at daylight hours). 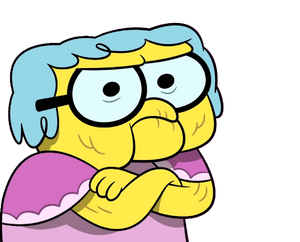 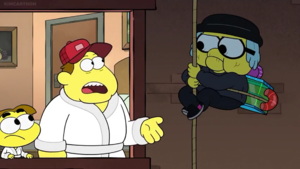 Retrieved from "https://hero.fandom.com/wiki/Alice_Green?oldid=2178308"
Community content is available under CC-BY-SA unless otherwise noted.