Our Last Crusade or the Rise of a New World

Princess of the Nebulis Sovereignty

Act Queen of the Nebulis Sovereignty

Having Iska to cooperate with her against a certain threat (succeeded via Sisbell).
Having Iska to become her lover and eventually marry him.
Kill the Eight Great Apostles (succeeded indirectly)
Defeat her elder sister, Elletear for her betrayal.
Protect her younger sister, Sisbell Lou Nebulis IX
Unveil the identity of the traitor (succeeded).

Alice is the second daughter and princess of Nebulis Sovereignty' royal family as well one of the two heiresses of the Nebulis Sovereignty (along with her younger sister, Sisbell Lou Nebulis IX) except for her eldest sister, Elletear (due to her extremely weak Astral Power and later her treason). At first, she once started out as Iska's enemy who is her main rival, but later became his ally after she learned of Iska is a traitor to the Heavenly Empire for freeing a captive Astral Mage turned out to be Alice's younger sister, Sisbell Lou Nebulis IX and cooperate with him when Iska finally accepted his fate to help her and Sisbell to take down someone who is a traitor that falsely accused her and her little sister as "traitors" of their supposedly ties within the Empire which is part of the real traitor's plans in attempt to destroy both the Heavenly Empire and the Nebulis Sovereignty after defeating the Witch Hunter Object.

Following the Empire's failure assassination attempt on her mother, Alice became the acting queen while her mother, Millavair goes hiding within the palace.

She is voiced by Sora Amamiya in the Japanese version, and by Emily Neves in the English version.

Alice is a tsundere. But also a calm and kindhearted individual when she mostly to protect her family. Much like Iska, Alice despised this 100 years' meaninglessly war and wanted to find peace to end the conflicts. When learned Iska was technically a traitor to the Heavenly Empire, she is willing to recruit him to become her ally though initially refused but later accepted (due to her sister, Sisbell) to cooperate against a traitor who falsely accused her and her younger sister, Sisbell as "traitors" due to their supposedly ties within the Heavenly Empire only to serve her sister, Sisbell as a temporarily guard much of Alice's jealousy.

Alice's rivalry towards Iska is actually her romantic feelings for him and intend to make him as his lover. In occasional, she plans to make her "rematch" with Iska as a marriage. However, she has developed an immense jealousy towards her younger sister who became her love rival, Sisbell Lou Nebulis IX (when she also fall in love with Iska because he freed her one year ago and later saved her again from the Witch Hunter Object) for clinging towards Iska as far as she ate a piece of smoothie cream from Iska's cheeks causing Alice to fell into a jealousy meltdown. She wasn't mad at Iska when she is only mad at Sisbell of holding hands with Iska which is unfair to her. Due to her jealousy towards Sisbell, Alice is also willingly to try holding hands with Iska but got accidentally pressed on to her chest caused her to flustered. After won from her and her sisters' game who would sleep next to Iska, Alice is shown to be perverted when she told Iska to take off his clothes since he saw her panties despite Sisbell forced him to look when she thought Alice was a traitor (turned out to be false as the true traitor is Elletear).

For Elletear's treachery in her attempt to kill their mother, Millavair and revealed her true nature and identity as the traitor during the chaos in the Heavenly Empire, Alice seems to hold a grudge on her elder sister for her selfish actions. When she was devastated by Elletear's psychological torments causing her to lose her remaining of the good image she had left for her big sister, she and the Sovereignty teamed up with Iska and the Empire (who were also betrayed by the First Seat Saint Disciple, Joheim (who revealed to be Elletear's right-hand man who worked for her as a spy)) in order to take down both Elletear and her servant, Joheim.

Due to her strong astral power in her birth, Alice possessed cryokinesis to have full control of icy abilities.

As one of the two (formerly three due to her sister, Elletear's treachery) princesses, Alice has the authority over her subjects.

Originally, Alice used to be Iska's main rival when he attempted to capture her. However, they now became allies when she realized Iska turned to be a traitor to the Heavenly Empire as she is willing to recruit him into the Nebulis though initially refused but served as Sisbell's guard much of Alice's jealously towards Sisbell after learning both nations would perish in the would-be all-out war if queen Millavair dies. She also have a romantic feeling for Iska as she will do anything to make him as her lover even when caused a love rivalry to her sister, Sisbell through Alice's very own jealousy. In her conversation with him following her jealousy towards Sisbell, Alice attempt to do the same thing with Iska as Sisbell did when they hold hands before Iska accidentally pushed his arm into her chest much of their flusters. In the Royal Villa when she is sleeping with him and her sisters, Alice asked Iska to take off his clothes since he saw her panties by Sisbell. However when the truth of 100 years incident and the Eight Great Apostles' true nature were revealed by Sisbell in the request of Emperor Yunmelngen, this revelations revealed that Iska and Alice were never truly enemies or rivals due to the manipulation of the Eight Great Apostles and Alice's sister, Elletear. They teamed up once more to bring an end to Elletear's evil plot.

They didn't interact much with her younger sister, Alice does care for her little sister, Sisbell so much and willing to protect her. When found the newspaper of Iska's sentence in Sisbell's bedroom, she is wondering of Sisbell's connection to Iska until she found out that he freed her from her imprisonment one year ago. Alice was assigned by her mother, Millavair to protect Sisbell at all costs from those who were sent after her youngest sister when she and Sisbell were falsely accused as traitors due to Elletear's manipulation that she given fake informations to Lord Mask and later the Hydra Family. They have a simple love rivalry when it comes to having their romantic feelings for Iska after the destruction of the Witch Hunter Object. In her secret mission of protecting Sisbell from those who are sent after her, Alice saw Sisbell with Iska and shown her jealousy towards her little sister when she clinging towards Iska as if it like a date, as far as she was driven in her jealousy meltdown after Sisbell ate a piece of smoothie cream from Iska's face. In her conversation with Iska following her extreme jealousy towards Sisbell, Alice revealed to Iska that she wasn't mad at him but rather mad at her little sister when holding hands and doing things with Iska were unfair to her. In the Royal Villa, Alice challenged Sisbell and Elletear into an alphabetical game of who will sleep next to Iska where Alice won much of Sisbell's jealousy. After Sisbell was kidnapped, Alice send Rin to rescue her sister from Kervina who attempted to provide an experimentation on Sisbell as she did to Elletear (Alice and Sisbell's older sister) only for Sisbell to be rescued by Iska and the 907th unit resulting of Kervina's death. When the founder Nebulis awakens and heading towards the Heavenly Empire, Alice shown worried that the founder is attempt to destroy the innocence including her sister, Sisbell.

Alice's older sister and archenemy as well as the traitor of the Nebulis Sovereignty.

Due to Alice having powerful star spirit and became the heir to their family's throne, Elletear hold a strong hatred toward her younger sister who is now her nemesis as she is willingly attempted to kill her and their mother Millavair to destroy both the Sovereignty and the Heavenly Empire to become queen by taking over the world.

In her falsely death, Elletear inflicted pain to Alice mentally into destroying the Heavenly Empire to further Elletear's schemes until in Light Novel 12, Alice shown devastated when she learned her sister, Elletear is alive as well revealed her true nature and identity as the traitor where Elletear tormented her sister's emotions even further, shattering the good image she had left for her big sister. With these revelations as well she became her elder sister's nemesis, Alice teamed up with Iska in order to defeat Elletear and bring an end to her sister's schemes. 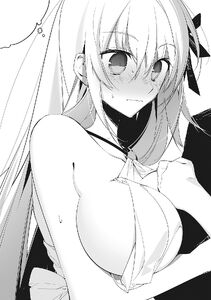 Alice blushed when flirting with Iska. 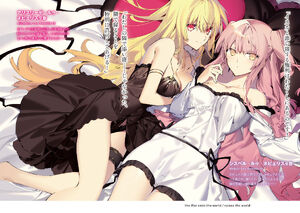 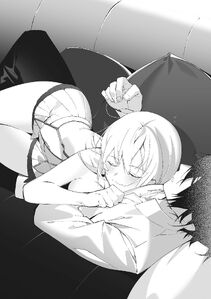 Alice flirted with Iska while sleeping.
Community content is available under CC-BY-SA unless otherwise noted.
Advertisement