Surviving alongside her fellow allies

To survive the post-apocalyptic world alongside her allies

Lead Heroine
Alicia Clark is the main protagoinst of AMC's Fear The Walking Dead, and the daughter of the late Madison Clark.

She is played by actress Alycia Debnam-Carey.

When Alicia was around 14-16, her father was killed in an accident and sometime later her mother started dating Travis Manawa. She began dating Matt Sale at some point and was later accepted into UC Berkeley.

Alicia is seen in the bathroom as her mom tells her to hurry up before school. She then goes with her mom and her mother's fiancee Travis to the hospital to visit her brother. There, she appears uninterested being there, she asks Travis if he's "glad he moved in" and then goes with her mom to school. At school, she is seen talking with her boyfriend, Matt and mentions that she is skipping Spanish and she could probably teach the class herself. Alicia suggests he come with her, but he says that he's not smart enough to be teaching classes. The next morning, she's visiting her brother and they talk about the fact that she's "perfect" and he was kicked out of college. They then talk about what happened and Nick tells her that he isn't crazy and things will be different now.At school, she is seen with Matt and she talks about how she's looking forward to being able to leave and plans to go to the University of California,Berkeley and she's able to get away.Matt sks about him but Alicia reassures him that it's only a few hours away "same state, same time zone". She and Matt then plan to hang out after school but he does not anwser her for awhile. When it is revealed that he got bit by a walker, she does not want to leave him even after her mom tells her but leaves after Matt urges her to go. After her mom goes to find more drugs for Nick and is told to watch him, she trys to go check on Matt. Nick tells her not to go and is worried that he has turned into the undead and might also bite her, but Alicia leaves after remebering the times that Nick would also break promises. But she returns after Nick starts to have a seizure and takes care of him even if she gets mad at him.When their mom returns later that night, they learn the reason why they have not gotten a call from Travis is because the phoen lines are down. They then hear a scream from one of the neighbors who is being attacked by a walker and Alicia trys to help out and not knowing what is really going on as her mom blocks her path to protect her, Alicia yells at her angry and confused. After she learns what happens if you get bit by a walker and turn into one of them after you die, Alicia refuses to believe that Matt might have turned into one of them. After the military takes over her neighborhood, Alicia is shown not wanting to adapt to life of being apart of a community of thinking that the people turned to zombies got solved. She is also shown to have becomed friends with Ofelia Salazar and later that day is shown looking around her former neighbor's home whose name was Susan Tran. After looking at a picture she drew for Susan that is framed in her house, she starts to cry after thinking of how her boyfriend Matt and Susan are both dead of because of the infection and starts to pierce her skin of where Matt drew a heart tatto on her arm in honor of his memory. She is shown concern for her brother after he is slapped by their mother and gives him a hug. She tells Nick to run after the soldiers try to take him away, which they then do as she is worried about her brother getting taken by the soldiers because of him relapsing of the drugs. She then reads Susan's letter later that night. Near the end of the season, she starts to bond with Travis's son Chris as they go to an abandond wealthy house and try on the clothes their and break all of the stuff there. The both of them then see the military trucks leaving and not patrolling the streets which makes Alicia realize there is something wrong. She then leaves with her mom, Travis, Ofelia, Daniel, and Chris to go and rescue her brother, Travis 's ex-wife and Chris's mother Liza, and Daniel's wife and Ofelia's mother Griselda at the compund where they are being held at. She stays with Chris in the car as the others go inside. Later soldiers come near the car and drag the both of them out of the car. One of the soldiers comes onto which makes Chris become aggressive because of him making a move on her. But Alicia tells them she has keys to car and hands them away. The same soldier puts his arm around Alicia and asks again if she wants to join him, but she shoves him away as Chris attacks the soldier and is shocked when the soldiers beat up Chris. The both of them are later reunited wiith everyone else when Ofelia's ex-boyfriend gets revenge of Daniel by shooting Ofelia in the arm. Travis then violently beats Andrew to the floor and it leaves face very bloody. Alicia and Nick are both visibly shocked by this. The group then goes to the oceanfront home of Victor Strand, a fellow prisoner locked up with Nick who has becomed friends with after they both escape their jail cell. Alicia and Chris are later both seen having some popsicles when they both hear a gunshot. They the discover that Liza has been shot by Travis because she got infected from a bite and knew their was nothing that could fix the infection. Chris is then shown crying over his mom's dead body and Alicia looks on in sadness. 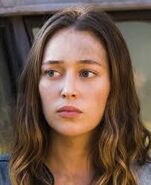 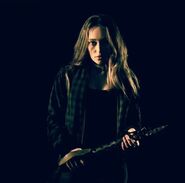 Alicia and her boyfriend Matt before he got bit. 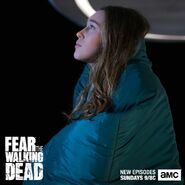 Alicia talking with her brother Nick
Add a photo to this gallery
Retrieved from "https://hero.fandom.com/wiki/Alicia_Clark?oldid=2146392"
Community content is available under CC-BY-SA unless otherwise noted.