The Legend of Heroes: Trails of Cold Steel

Take over the Reinford Group, Uncover the mystery of the old schoolhouse (succeeded)

Alisa Reinford is one of the main protagonists and playable characters of the video game tetralogy The Legend of Heroes: Trails of Cold Steel. She is a student at Thors Military Academy and a member of Class VII. Introducing herself as 'Alisa R', she is later revealed to be the only daughter of the Reinford family and the young heiress of the Reinford Group, the largest and wealthiest industrial company in Erebonia. Her mother is Irina Reinford, the current chairman of the Reinford Group and a member of the academy's board of directors.

She is voiced by Yui Horie in the Japanese version and Rachel Hirschfeld in the English version, the former of whom also voices Nepgear and Yamraiha.

A young woman of a slender build, Alisa sports long blonde hair with pigtails and accented with purple ribbons. In the game's intro, she wears the crimson uniform for Class VII with black thigh-high stockings and brown knee-high boots.

In Trails of Cold Steel, she wears the standard special Class VII Thors uniform with lengthy socks. She sports pigtails while also letting the majority of her hair out.

In Trails of Cold Steel II, she wears a white and brown shirt and a white and red skirt, with thigh-high socks, shoulder-length gloves and two brown shoes on her feet. Her hairstyle, however, has not changed.

Alisa is fiery and strong-willed, often letting her emotions overwhelm her logic, as well as stubborn to a fault, something she's all too aware of. Initially, she comes off as a very petty person who holds grudges over the slightest misunderstanding, slapping Rean for accidentally landing face-first into her breasts in the old schoolhouse and acting coldly towards him for much of the preceding month. On the day of the group's first field study, however, she reveals that she is actually a very kind girl when she wholeheartedly apologises and admits that she had been trying to do so ever since it happened, since she knew all along that it was just an unfortunate accident. She even goes so far as to take full responsibility for the incident; Rean felt partially responsible due to his attempts to play the hero, believing he should have known that the trapdoor was designed so they wouldn't get hurt from the fall, but Alisa assures him that there's no way he could have known that, and that she's the one in the wrong regardless of how one looks at it. From then on, she consistently proves herself to be very friendly, sweet and affectionate, not just to Rean, but to all of her friends, though she still gets flustered easily, a trait she shares with Rean, and that they bond over. She has a tendency to act like an older sister to those younger than her, such as Fie, an example being when she berates Laura for acting coldly towards Fie despite being her senior.

Although she can be a bit hot-headed at times, Alisa is extremely intelligent; she ranked near the top of her class when she lived back in Roer, which Rean considers to be very impressive for a city that big, and ranks 8th in the entirety of Thors Military Academy during the groups midterms. Her hobbies include archery, wielding an orbal bow in combat, and horse-riding, which she puts to good use during the group's field study in the Nord Highlands, even carrying Emma, who has no experience in horse-riding, with her. She learned the former from her maid, Sharon and the latter from her grandfather, Gwyn. She is also very athletic, which causes her to develop a rivalry with Class I student Ferris Florald, who resents Alisa for always one-upping her. However, this is largely one-sided, as Alisa is generally just annoyed by Ferris' behaviour. Ultimately, their relationship mellows into a friendly rivalry when Alisa, along with Rean, saves Ferris from a pack of wolves. That evening, the two girls are shown having tea together, with both of them agreeing that they'll use their newfound friendly rivalry as a motivation to better themselves during their time at Thors.

Alisa was quite a lonely child growing up, not being able to make many friends due to her status as a member of the Reinford family; the nobles look down on her due to her not being one of them, and the commoners treat her like she's different from them too due to her extreme wealth. Her loneliness is not helped by her familial issues, which are extreme even by Class VII standards; not only did her father supposedly die eight years prior to the story, but her grandfather left the company three years later after her mother went behind his back. Overtime, Alisa came to resent her mother for tearing their family apart and left to enroll at Thors Military Academy. Wanting to distance herself from her family, she hides her heritage from her classmates at first, introducing herself as 'Alisa R'. However, her heritage comes out in the open when Sharon is sent to Class VII's dormitory as its caretaker, and later, she learns that her mother sits on the academy's board of directors, causing her to believe that her efforts to get away from her mother were all for naught. In general, Alisa feels as though she has no control over her life, saying that while her mother tells her to do what she wants, she always seems to end up doing what her mother wants her to do. Despite all of this, deep down, Alisa does still care for her mother and wants her approval, even taking the time to worry about her rather than be genuinely resentful. These moments do not go unnoticed by Sharon, who states that the way the two secretly care for each other is one of the reasons she's so proud to serve them.

Alisa frequently expresses her disapproval at how the Reinford Group is run; when Patrick calls her family "a family of upstart arms peddlers", Alisa begrudgingly acknowledges that he has a point, saying she won't deny how the Reinford Group made its millions. She is also initially sceptical about Class VII's use of the ARCUS units due to the Reinford Group having a hand in making them, though she soon grows to realise they have great potential, even if she hates to admit it. Eventually, she tells her mother that she'll show her how to run the company after she graduates, though she later admits to Rean that she said that in the heat of the moment, and she isn't sure if she can live up to it. 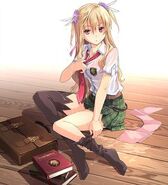 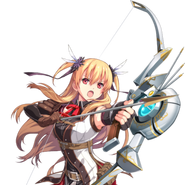 Alisa and Sharon
Add a photo to this gallery

Rosetta Arrow
Add a photo to this gallery
Retrieved from "https://hero.fandom.com/wiki/Alisa_Reinford?oldid=1607978"
Community content is available under CC-BY-SA unless otherwise noted.