Teacher
Eighth One For All User

One For All (Able to stockpile power and massively boost strength, speed and durability; formerly)

Find a Worthy Successor for the One For All Quirk (succeeded).

Prepare Young Midoriya to inherit One For All at 100% to face off against All For One and Tomura Shigaraki, and to become the Next Symbol of Peace (ongoing).

All For One (archenemy)

The former No. 1 Hero and the eighth user of the One For All Quirk, he teaches Foundational Hero Studies at U.A. After fighting against All For One where he used up the leftover embers of One For All completely to defeat All For One, All Might retired from crime fighting, and thus, ending his era. He was replaced by his rival, Endeavor as his successor as the No. 1 Hero.

In Japanese, he is voiced by Kenta Miyake, who is known for voicing Muhammad Avdol in JoJo's Bizarre Adventure: Stardust Crusaders, and by legendary voice actor Christopher R. Sabat in the English dub, who also voiced Vegeta and Piccolo in the Dragon Ball franchise, and Roronoa Zoro in the One Piece franchise.

Toshinori Yagi, aka All Might is Japan's highest-ranking hero, who acts as a pillar of hope and justice for heroes everywhere to follow. His mere presence strikes fear into the heart of villains all around the world, as none can stand up to his massive power.

Unbeknownst to the world at large, however, is that All Might's great power is not his own, as he was actually born Quirkless. In truth, the Quirk he holds is one that was passed down to him from his mentor, and he's the eighth person to hold it. He's held the power since he was a mere teenager and has used it to become the Symbol of Peace he's known as today. Unfortunately, due to an intense battle with a powerful supervillain in his past, his body has significantly weakened. The only thing that has not weakened is his will to bring goodness and peace to the world.

Now, he can only do hero work for up to three hours a day, and, once his limit is reached, he becomes a lanky, skeletal man who constantly coughs up blood. Only a select few staff at U.A. know this, and even fewer know the true nature of his Quirk. The story of My Hero Academia follows his successor, Izuku Midoriya, as All Might teaches the young man how to hone the immense power he's been gifted with.

In his hero form, Toshinori is extremely tall and very muscular man, whose design resembles a generic American comic book superhero. His hair spikes on top of his head and his whole body has more shadows than any other character in the series regardless of the time of day, furthering his stylized appearance. His Hero Costume consists of a red, white, and blue bodysuit with golden gloves and boots, a lot like generic American superheroes. It has been shown with and without a cape. Overall, its design is considered very classic.

In his true form, he is an overly-skinny man with angular features, long limbs, and neck. He has spiky, dishevelled hair with two bangs framing the sides of his face and loses his eyebrows from his hero form. He possesses a large scar that covers most of the left side of his chest, and it is not uncommon for him to spout blood from his mouth when excited or surprised. He typically wears baggy clothing to accommodate his Quirk's size change, but after his true form was exposed to the world, he started wearing more fitting clothes.

Note that in both forms, his eyes are sunken in. The difference is that you can see his eyes more in his true form.

While in his muscle form, All Might embodies the ideal image of a comic book superhero; charismatic, courageous, selfless, kind-hearted, and protective hero. He is protective over the lives of others and acts as the "Symbol of Peace" while protecting the people of Japan. With a hearty laugh, he uses his signature smile to put others at ease, assuring them everything is fine because he is there.

In his true form, All Might becomes a more serious and focused person, although is still capable of showing his genuine smile and concern for others well-being, albeit not at his usual grandiose extent.

Regardless of what form he is in, All Might still embodies the ideals of a true hero with a good heart to match. Ever since he was young, he dreamed of becoming a symbol that others could rely on during harsh times, upon receiving his Quirk he would rise not only to become that symbol but to become a legend that would inspire countless others to become heroes and follow in his will. Even the notorious Hero Killer, Stain, regards All Might as a true hero and what every hero should be; selfless and willing to help others.

After his retirement, All Might dedicated the rest of his life to training Izuku, entrusting him with the information about the other One For All users and their Quirks.

One For All: All Might inherited the Quirk called "One For All." It would allow him to stockpile an enormous amount of raw power, allowing him to significantly enhance all of his physical abilities to a superhuman level. This resulted in unbelievable levels of strength, speed, agility, and durability that make All Might nearly invincible.

Shade Manifestation: Due to still being alive unlike the other previous users, All Might projects himself within One For All as a shade which manifests in the shape of Toshinori's true form but made out of yellow energy. In this form, the shade can communicate with the previous users and share information with them.

Intimidation: Even without his powers, All Might can project his own will to intimidate others in a similar manner to Stain. However, All Might's will instead stems from his protectiveness towards Izuku and his willingness to risk his own life for his student. 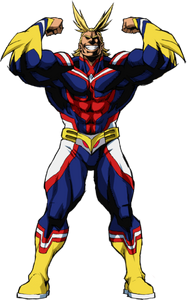 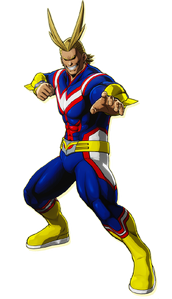 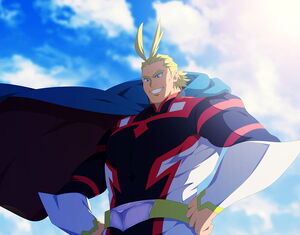 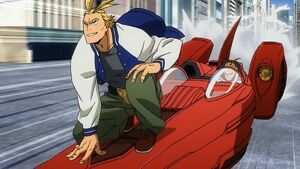 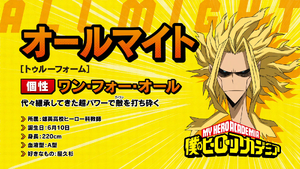 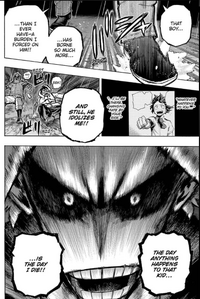