No information
All of Love is one of characters of Servamp. His Eve is Misono Alicein. He is the second youngest of the eight known Servamps, and has a tendency to strip no matter the occasion.

He is voiced by Kazuma Horie in the Japanese Version and Jerry Jewell in the English Version.

His animal form is butterfly.

For generations he has served the Misono family alongside Doubt Doubt, the Servamp of Envy. After Mikuni killed his mother to protect Misono years before, Lily manipulated Misono's memory so he won't remember the reason behind Mikuni's banishment from the house out of fear that Misono would reject him for being the representation of lust. When Misono finds out Lily's manipulation without knowing the truth, the bond between him and Misono becomes strained for a moment, giving Otogiri the opportunity to destroy his pocket watch that was also the source of his power, greatly weakening him. Since then, Lily is mostly bedridden and lost his tendency to strip as his body becomes weaker. 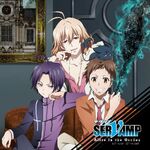 Add a photo to this gallery
Retrieved from "https://hero.fandom.com/wiki/All_of_Love?oldid=1819130"
Community content is available under CC-BY-SA unless otherwise noted.