Leader of the Underground (Alphys Ending)

Spying on the protagonist (formerly).
Hanging out with Frisk, Undyne and anyone she considers her friends.
Watching Anime.

To find a way to prove that monsters can handle determination (failed).

Frisk (if the player chooses the Genocide Route)

Alphys is a major character in the 2015 indie-game Undertale, serving as a major protagonist in the True Pacifist and Neutral routes and an unseen major antagonist in the Genocide route. Alphys makes her first appearance after Frisk enters Hotland. She is the Royal Scientist who works in the Lab located in Hotland. Alphys has a crush on Undyne, the leader of the Royal Guard.

Alphys appears to be a yellow reptile-like monster and is almost the same height as Frisk. She is seen wearing a white lab coat and glasses. Afterward during her date, she is wearing a black and white polka dot dress, which she also wears on other special occasions.

Alphys is a nerdy, shy recluse with a fondness for human anime and manga. She is very insecure, worrying about what other monsters think of her. Her failed experiments with Determination that involved the creation of the amalgates contributed to this, as she was filled with guilt, told nobody, and became depressed. She has a crush on multiple characters (some mild, others more serious), but struggles to communicate her feelings. She deeply cares for other monsters, as evidenced if Frisk follows a Genocide Route but aborts it in Hotland; after hearing Undyne's last words and evacuating the monsters, Alphys, whose resolve is strengthened, becomes their ruler. Even after people discovered her failed experiments with determination, they treated her as a hero, much to her surprise. She mourns the loss of her friends, then says that she really should have killed Frisk when she had the chance.

Little is known about her personal history, except that she met Undyne at the Garbage Dump and that Alphys created the Amalgamates via an experiment involving Determination afterward.

She first meets Frisk as the latter enters her lab. As Frisk goes on their way through Hotland, Alphys comes to Frisk's aid several times. 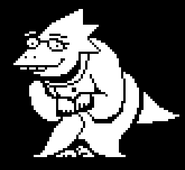