His quest begins 25 years after the events of Castlevania: Lords of Shadow, where he is tasked by the Brotherhood of Light to stop Dracula. He is the son of Gabriel and Marie Belmont and is the father of Simon Belmont, and he was later turned into a vampire after his fatal duel with his father. Alucard returned and helped his son defeat his father, but later worked with Gabriel to defeat Zobek and Satan.

He is voiced by Richard Madden (who also portrayed Robb Stark in Game of Thrones and Ikaris in Eternals), as Stuart Campbell voiced the character younger in Lords of Shadow 2.

Marie gave birth to Trevor whilst Gabriel (who was unaware of the pregnancy) was away on a quest for The Brotherhood of Light. Knowing of Gabriel's eventual fate, The Brotherhood raised and trained Trevor until he reached adulthood. Trevor eventually married and had a son named Simon.

As he discovered what happened to his father and knowing his own fate, Trevor decides to begin his journey to Dracula's castle in order to destroy the vampire lord, but not before telling his wife to take Simon to safety if he does not return from his quest in two days. During his quest, Trevor is mortally wounded by Dracula and dies, but not before gazing into the Mirror of fate and learning of Dracula's past and revealed himself to be his son. A remorseful Dracula tried to revive his son with his blood, but it appears not to work.

Dracula then places Trevor into a coffin with the name Alucard on it, due to not knowing his son's name. Dracula would send his creatures to attack the brotherhood, where Trevor's son would witness his mother's death, and become a knight to kill Dracula years later. Years later, Trevor now known as Alucard is revived as a vampire and aids a now adult Simon in fighting and defeating Dracula.

He also appears in Castlevania: Lords of Shadow 2, playing an important role, and being the hope Dracula needs to battle his own demons (mainly Inner Dracula). In addition, Alucard appears as a young child, who wants the mirror fixed as Dracula sees him as a return to his human side.

He returns as a playable character in the DLC Revelations, showing how he collected Dracula's weapon in the castle, seeing his mother's spirit, and defeating Zobek's lieutenant.

Trevor Belmont was born in 1046 to Gabriel Belmont, a member of the Brotherhood of Light, and Marie Belmont. Pan and the elders of the brotherhood believed that Gabriel was God's chosen one and foresaw that Belmont could fall into darkness, and persuaded Marie to keep Trevor's birth a secret. This act saved Trevor from death, but Marie was killed a Gabriel while possessed by Zobek, a member of the Lords of Shadow. Trevor was raised by the Brotherhood of Light to be a warrior like his father, and didn't learn of his father or lineage until the events of Mirror of Fate. While serving the brotherhood, Trevor met a woman named Shypha Belnades, and the two later married and had a son named Simon. Pan and the elders were correct on Gabriel being the chosen one, and Belmont fell into darkness after defeating the Lords of Shadow, becoming a vampire and turning against the brotherhood.

The elders of the brotherhood tasked Trevor with stopping Dracula from Bernhard Castle, and revealed his true lineage to him and fate of his mother. Seeking revenge, Trevor said his goodbyes to his family and traveled to Bernhard Castle, battling numerous monsters and creatures that crossed his path. Making his way to Dracula, Trevor engaged him in combat, but was killed by the vampire, having impaled him with his combat Cross. Trevor revealed the truth to Dracula of his lineage, and Dracula learned of this with the mirror of fate. Gabriel became remorseful for his actions, and attempted to revive Trevor by using his blood, and buried his son with the name "Alucard". Angered by the brotherhood's actions, Gabriel sent his monsters to the brotherhood and village where Sypha and Simon were, which resulted in Sypha's death.

Thirty years later, Alucard awoke and realized that he had been turned into a vampire, and decided to confront his father once again to finish his quest. During his journey through Bernhard Castle, Alucard encountered his son Simon, who had become a warrior for the brotherhood who wanted to kill Dracula to avenge his mother's death. Alucard assisted Simon in battling Dracula, which resulted in the vampire lord's apparent death. Alucard remarked that Dracula wasn't dead, and forced Simon to give up a fragment for the mirror of fate, and didn't tell Simon that he was his father. While leaving Bernhard Castle, Alucard collected the broken stake attachment from the Vampire Killer that was used on Carmilla during Gabriel's quest in Lords of Shadow.

After the Brotherhood of Light failed to defeat Dracula once again, Alucard returned to his father and revealed that he had a plan to defeat both Zobek and Satan. Alucard showed Dracula the Crissaegrim, a sword he created from the forged stake from the Vampire Killer. Though the sword couldn't kill a vampire, Alucard intended to use the Crissaegrim to piece Dracula's heart to put him into a deep slumber. Dracula agreed, and Gabriel went into deep sleep for centuries, with the world thinking he was dead. Centuries later, Alucard continued the second phase of his plan, removing Crissaegrim from Dracula's body, and worked on collecting Dracula's weapons and guised himself as Zobek's lieutenant.

While Dracula was being tasked by Zobek to kill Satan's acolytes, Alucard continued to be in the guise of Zobek's lieutenant, using the armor's supernatural power to prevent Zobek from reading his mind. When Dracula and Zobek were preparing to kill the final acolyte, Alucard placed his hand on his father's shoulder, allowing Dracula to regain his memory of the plan. Afterward, Alucard and Dracula teamed up to kill Zobek, and successfully managed to kill Satan, ending the threat once and for all. 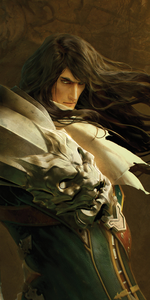 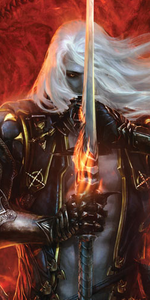