Spending time with their family and singing with the Chipettes

Alvin is the self-proclaimed leader and also the oldest of the Chipmunks, sporting a red shirt with a large "A" on it and a tone of conceit. Alvin is easy to tell apart from his brothers and often is the focus of the life-lessons being touched upon. Alvin is brash, proud and arrogant but never callous to his fans or brothers. Mostly he is usually acts like the manager of the group since Dave doesn't act like one.

Theodore, the youngest chipmunk due to his youthful appearance and is clad in green and often can be distinguished from his two older brothers as the worrywart of the crew. Theodore tends to be shy and prudish compared to his brothers while also easily the kindest. Most of Theodore's problems stem from his less than assertive nature and any life-lessons touched upon for him mostly involve him overcoming his demure nature. Just like Simon, he is also the straight man of the group too.

Simon is the middlest chipmunk and the deuteragonist of the series, and easy to pick out with his long blue shirt and glasses. Simon prides himself on being the most intelligent of the three and the most sophisticated, life lessons taught to Simon usually focus on teaching humility...or can be as simple as just never trusting Alvin over his own good sense. Simon is usually the straight man next to Alvin's antics and the only one looking out for Theodore.

Alvin, Simon and Theodore are the main protagonists of the Alvin and the Chipmunks film series. The three perform as a musical troop plying their talents as a sort of high pitched a Capella troop. Their style is considered a success in-universe which as earned them fame, moderate wealth and celebrity status. They are also the adoptive children of Dave Seville. 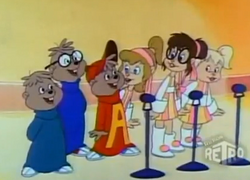 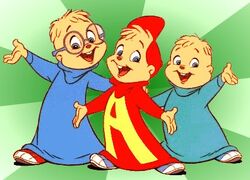 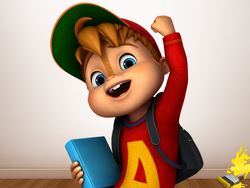 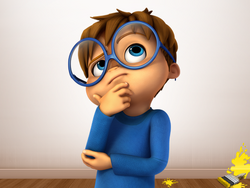 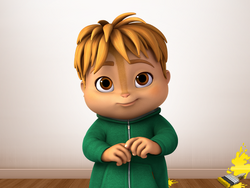 Chipmunks through time
Alvin and the Chipmunks.jpg 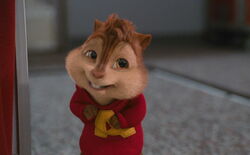 Add a photo to this gallery
Retrieved from "https://hero.fandom.com/wiki/Alvin,_Simon_and_Theodore?oldid=1260637"
Community content is available under CC-BY-SA unless otherwise noted.