Lady of the houses Thenn and Karstark

Aristocrat, Victim
Alys Karstark is a supporting character in A Song of Ice and Fire and in its television adaptation Game of Thrones. She is the only daughter of Rickard Karstark, Lord of Karhold. She was betrothed to Daryn Hornwood, heir to the Hornwood, they were arranged to marry when she flowered. When Robb Stark called his banners Alys asked her father to leave one of his sons as castellan of Karhold, but they all wanted the glory.

In the TV series she is portrayed by Megan Parkinson.

Daryn was killed in the Battle of the Whispering Wood, as were two of Alys' brothers, Eddard and Torrhen, by Ser Jaime Lannister while protecting Robb. Rickard writes to his daughter, telling her he will find another betrothal. He offers Alys' hand to whoever brings him Jaime Lannister after they are released. The Brave Companions, a particulary vile sellsword company, capture Jaime and their leader, the psychotic and ambitious Vargo Hoat, hopes to deliver Jaime to the Karstarks and marry Alys, giving him a chance to become Lord of Karhold.

Rickard is executed by Robb for murdering two squires who were cousins of Jaime Lannister, along with making his men desert to search for Jaime. Rickard's only surviving son, Harrion, becomes Lord of Karhold. However, he is captured by the Lannisters and held at Maidenpool.

Rickard's uncle Arnolf Karstark has been left as castellan of Karhold and plots to gain control. He declares for Stannis Baratheon, hoping this will prompt the Lannisters to execute his great-nephew Harrion, rightful heir to Karhold, making Alys inherit Karhold. Arnolf plans for Alys to marry his eldest son, Cregan Karstark, making him Lord of Karhold. Alys believes Cregan killed his first two wives and fears he will do the same to her once she bears him a son. Arnolf also plans to betray Stannis when the Boltons give the signal.

Alys rides to the Wall to seek help from Jon Snow, the last son (apparently) of Eddard Stark. She is pursued by Cregan, but reaches Jon Snow and informs him of her relatives' plans. Cregan arrives the day after Alys with intentions to take her against her will and he is imprisoned by Jon. Jon sends a message to Stannis informing him of Arnolf's treachery. Alys agrees to a marriage with Sigorn, Magnar of Thenn, arranged by Jon, which he does in order to protect Alys from Cregan and so she can take back her home, the Karhold. Melisandre performs the wedding. Alys hopes to retake Karhold with her new husband and the aid of the Thenns. Alys tells Jon about dwindling food stores at Karhold and fears not many old people will survive the winter. She agrees to Jon's suggestion that if food stores dwindle enough, she consider sending her willing old men to the Watch so they have a chance to survive and won't be alone and Alys agrees. 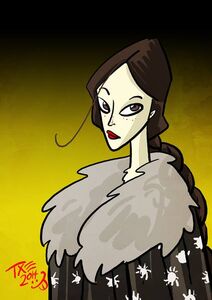 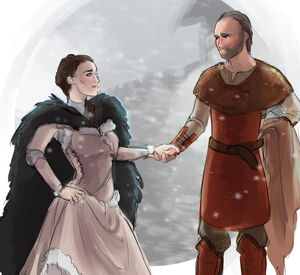 Alys with her husband, Sigorn of Thenn.