Scooby-Doo and the Alien Invaders

Alien explorer
Amber is Crystal's beautiful golden retriever from Scooby-Doo and the Alien Invaders, who is in actuality an alien sent to explore earth with her co-agent Crystal.

She is voiced by Candi Milo.

She & Crystal were alien explorers from a planet 20 light years away from Earth who had been tasked by their planet's government to check out the planet Earth. Since their only information about Earth came from 1960s television broadcasts, they disguised themselves as hippies so as to blend in with the locals. Amber in particular disguised herself as a Golden Retriver with a red bandanna. While out in the Sonoran Desert, they found Shaggy Rogers and Scooby-Doo after they were supposedly abducted by aliens (Actually the SALF station crew in disguise).

Scooby immediately falls in love with the Golden Retriver and tries to win her affections as Crystal escorts the two to the local dinner. His affection is at first quite one-sided as Amber shows no interest in him, huffing and turning her head unimpressed

Later, when Shaggy, Scooby, Crystal & Amber are exploring the area where the two claimed to have seen the aliens (and a Jackalope as well), Scooby continues to try and win her affection. He eventually succeeds by bringing her flowers which causes her to fall in love with him and give him a lick on the cheek. Scooby rejoices and brings her a whole rose bush. Their fun is cut short when two military policemen force the group. After this, Crystal tells Shaggy that she is really a goverment agent herself sent to investigate strange happenings in the area. She also tells Scooby that Amber is a government trained dog, though Scooby still loved her anyway. The pair convince Shaggy & Scooby to go back with them. When Scooby agreed, Amber gave him a tender kiss on the lips. 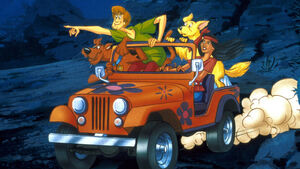 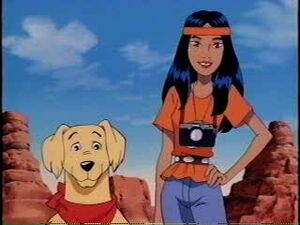 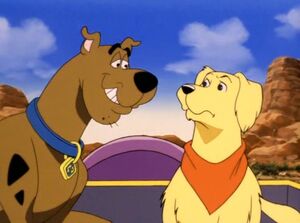 Scooby falls in love with Amber 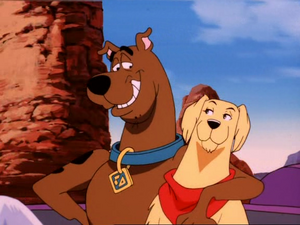 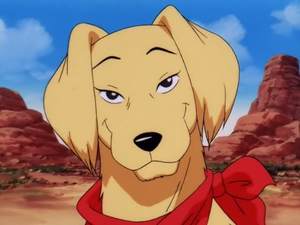 Amber falling in love with Scooby 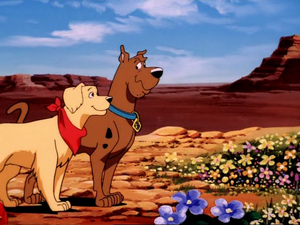 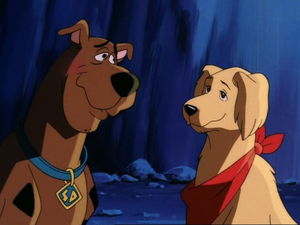 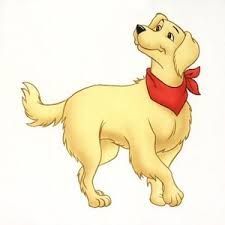 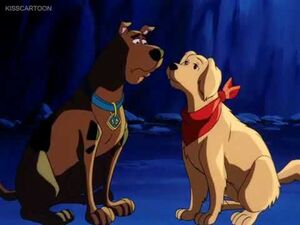