Prevent the Young Masters of Evil from disrupting the balance between Chaos and Order.

Protect Wiccan.
Defeat Mother.
Force Galactus back inside the Incubator's chamber (both succeeded).

America Chavez, also known as Miss America (b. July 4), is a fictional character and superheroine from Marvel comics, appearing as the main protagonist of the America comics, and a major character in the Young Avengers and Ultimates comics.

She is a Latin-American teenager from Utopian Parallel universe, and was sent to the main universe following the destruction of her home. America was later adopted by Santana family, and she decided to become the second Miss America after deciding to protect her neighborhood from criminals. Chavez would be introduced to other superheroes, and soon become a member of the Young Avengers, A-Force, Secret Warriors, and the Ultimates.

She debuted in the 2011 limited series Vengeance by her creators Joe Casey and Nick Dragotta. Chavez later appears in the 2013 Young Avengers series by Kieron Gillen and Jamie McKelvie and in the 2015 series, A-Force, by G. Willow Wilson, Marguerite Bennett and Jorge Molina. Beginning in October 2015, Chavez has appeared in Ultimates by Al Ewing and Kenneth Rocafort as part of the All-New, All-Different Marvel initiative.

America Chavez was raised by her mothers in the Utopian Parallel, a dimension out of time and in the presence of the Demiurge. She appears to have inherited or absorbed some or all of her superpowers from the Demiurge's ambient magical presence. When America was approximately six-years-old, the Utopian Parallel was threatened by destruction.

America's mothers sacrificed themselves to seal the black holes pulling Utopia into the Multiverse resulting in their particles being smeared across the Multiverse itself. Wanting to prove herself as a hero and knowing Utopia didn't require salvation, America ran away from her home and her responsibilities. She travelled across different dimensions, eventually adopted the moniker of Miss America, and began covertly acting as a superhero.

Miss America eventually joined the Teen Brigade and despite her young age even served as co-leader with Ultimate Nullifier. With the Teen Brigade, she freed the In-Betweener from government confinement center, Groom Lake Adjacent in Nevada. With information from the In-Between, the Teen Brigade set out to prevent the Young Masters of Evil from disrupting the balance between chaos and order.

To stop the Young Masters from recruiting Kid Loki, Miss America broke into the Metropolitan Art Museum, but Loki used the Screaming Idol to send her to the Sixth Dimension. There she fought Tiboro, and was later rescued by the Last Defenders, She-Hulk and Daimon Hellstrom, under the direction of the In-Betweener. She rejoined her teammates in Latveria where they fought the Braak'nhüd, Young Masters and Doctor Doom. The battle was ended when Ultimate Nullifier shot the In-Betweener. While the smoke cleared, the Teen Brigade covertly departed. Ultimate Nullifier and America briefly engaged in a romantic fling, but it ended when America abruptly left the Teen Brigade.

Miss America parted ways with the Teen Brigade due to "musical differences", and eventually travelled to Earth-212. She was later approached by the teenage trickster Loki. He attempted to persuade Miss America into killing Wiccan for the good of the Multiverse. Disgusted with the proposition, Miss America fought Loki and decided to secretly protect Wiccan. On Earth-616, Miss America stopped Loki from magically attacking Wiccan in his home. Hulkling intervened, but Miss America and Loki quickly fled with little explanation.

Miss America later rescued Hulkling, Wiccan, and Loki from the Mother, an interdimensional parasite, escaped with them aboard Marvel Boy's ship, and aided them in the final face-off with Mother's forces in Central Park. Later, in Young Avengers #15, she reveals offhandedly to the team that she is not interested in men, and writes off her one-time kiss with the male teen superhero Ultimate Nullifier as experimentation.

During the 2015 Secret Wars storyline, Chavez appears a member of the A-Force, an all-female team of Avengers. When the fictional island-nation of Arcadia is attacked by a megalodon, Chavez throws the shark across the Shield, the wall that separates Arcadia's borders, thus breaking the laws of King Doom. She is subsequently arrested and sentenced to spend the rest of her life protecting the wall called the Shield which surrounds Battleworld.

After the events of Secret Wars, Chavez is invited to join the new Ultimates by Blue Marvel.

Chavez possesses superhuman strength, durability and the power of flight. Chavez also has the power to kick open holes in reality, allowing her and her teammates to travel through the multiverse and into other dimensions. Ms. America is also able to move at superhuman speeds, able to catch up to and nearly exceed the speed of light as observed by Spectrum in her light form. 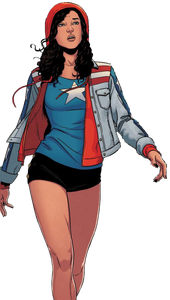 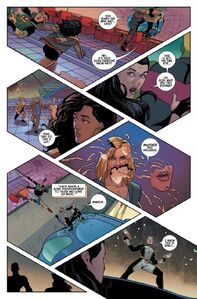 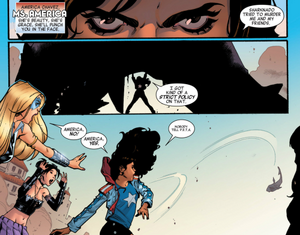 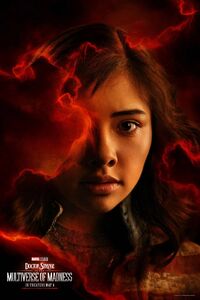 Xochitl Gomez as America Chavez in the Marvel Cinematic Universe. 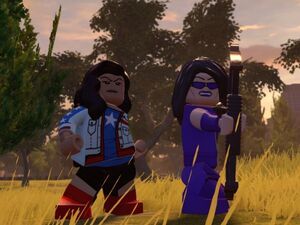