American Intelligence Mechanics (A.I.M.) orginated from Avengers Idea Mechanics which was formed from the result of Bobby da Costa's take over of Advanced Idea Mechanics. The new A.I.M. formed by Sunspot now protects America and as a result created the U.S.Avengers.

A.I.M.'s leader Bobby da Costa made a deal with U.S. General Maverick a.k.a. Red Hulk for amesty in exchange for taking down rogue A.I.M. cells such R.A.I.D. and R.G.M..

The American Inelligence Mechanics agents are deceived into three groups Red Team for security and tactics division, White Team for science and engineering division, Blue Team for admin  and research.

Roerto founded the American Inelligence Mechanics because of his love for his adopted home. While he my not be from the U.S.A. Bobby puts American first before his home country he was born in.

A.I.M. will dare any danger no matter how awesome that danger might be to save their nation. And they'll do it all looking tried & true to the red, white & blue. 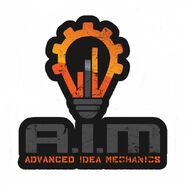 Add a photo to this gallery
Retrieved from "https://hero.fandom.com/wiki/American_Intelligence_Mechanics?oldid=1757047"
Community content is available under CC-BY-SA unless otherwise noted.