They have been friends for 10 years and refer to themselves as the BFFL (Best Friends For Life) Club. Amethyst's Ancient is her grandmother.

Amethyst has fair skin, purple eyes, and tall, wavy pink hair. On Trollz.com, her hairstyle is described as "Twin Curls" and costs $50. Amethyst keeps her haircare with a heart-shaped, pink hairclip. She wears pink lipstick.

Amethyst's outfit consists of a pink, short-sleeved top with puffed sleeves. It has a white-collar, white cuff, and her stomach is exposed to reveal a heart-shaped pink gem in her belly button. Her skirt is pink with a white hem. She has a pink fabric at the top of the skirt, and she wears pink, heart-shaped earrings, and an anklet with pink beads and a pink heart. She wears a pink wristwatch and a pink spell bead bracelet, Her shoes are pink with black straps. Amethyst has elf-like ears, thin eyebrows, and a slimmer body.

When Amethyst was a baby, a drop of magic amber was placed in her belly button right after she was born. The drop hardened and became a distinctive, pink, heart-shaped gem. She became friends with Ruby, Sapphire, Topaz and Onyx when she was 4 years old. When Amethyst was 14, her gem got its glow, meaning she could now use spell beads to produce magic spells. 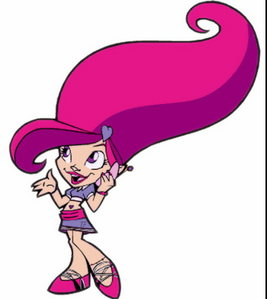 Add a photo to this gallery
Retrieved from "https://hero.fandom.com/wiki/Amethyst_van_der_Troll?oldid=1841712"
Community content is available under CC-BY-SA unless otherwise noted.