AmpFibian is the Omnitrix's DNA sample of an Amperi from an unknown planet in the Andromeda galaxy.

In Fused, Ben uses the Ulitmatrix to scan Ra'ad and obtain the Amperi DNA for the Codon Stream, thus obtaining AmpFibian in the process. Unaware that Ra'ad was also trapped in the Ultimatrix and manipulated the device to allow Ben to only transform into AmpFibian, so Ben transform into his Amperi form to battle Aggregor, but Aggregor suddue AmpFibian and decided to take him instead of Ra'ad. Gwen used her magic transport her, Kevin and AmpFibian away from Aggregor. Kevin rebuilt the machine he once used to hack the Omnitrix in Vengeance of Vilgax: Part 1, to reactive the Ultimatrix so AmpFibian can revere back into Ben. Ben soon realised that Ra'ad is fused with him in his AmpFibian form and plans to take over him along the his Ultimatrix to prevent Aggregor from finding with it's energy signal. Ra'ad soon take control of AmpFibian and tries to attack Kevin and Gwen, but Gwen trapped him in her Mana force-field, and Kevin absorb rubbler to project him from AmpFibian's electric attacks and used the machine to reboot the Ultimatrix, and transforming AmpFibian back into Ben and separate Ra'ad from AmpFibian's DNA.

In Deep, Ben transforms into AmpFibian to help him breathe underwater on Piscciss and swim straight toward the planet's core. AmpFibian gets caught in a energy net, but absorb it and redirect to the Piscciss Volanns guards and then make his way into Piscciss's core before he change back into human.

In Viktor: The Spoils, King Xarion transform Ben into AmpFibian while he was still unconscious and chained up in the laboratory, so Xarion can use AmpFibian's electrokinetic powers to help transfer his mind into the lifeless body of Viktor through headbands.

In Inspector 13, AmpFibian when used by Kevin and destroyed several Techadon robots before Ben reset the Ultimatrix and transform AmpFibian back into Kevin afterward.

In Night of the Living Nightmare, Ben transforms into AmpFibian to electrocute Kevin (as Ultimate Kevin) for attempting to steal the Ultimatrix from him. AmpFibian was worry about that he had killed his best friend, but soon gets suspected of Gwen (in her Anodite form and actually Albedo in disguise) thinking more about the Ultimatrix than Kevin's demise, he suddenly realised it was all just a dream created by Albedo in attempt to surrender the Ultimatrix to him. 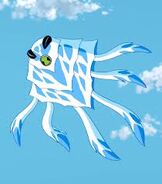 AmpFibian in Omniverse
Add a photo to this gallery
Retrieved from "https://hero.fandom.com/wiki/AmpFibian?oldid=1932951"
Community content is available under CC-BY-SA unless otherwise noted.