Parent
Amphytyron is a character in Disney's 1997 film Hercules. He is the husband of Alcmene and the adopted father of Hercules, whom he raised since he was a baby.

Amphytyron alongside his wife first appears after Pain and Panic feed a baby Hercules a mortality potion, but fail to eliminate him under Hades' orders. The two of them decide on to raise Hercules themselves after believing that he was abandoned. They also discover a medallion marked with the symbol of the gods on it and decide to keep in a secret until Hercules was old enough to know whom his parents may be.

Years later, after Hercules has grown into a young lad, Amphytyron takes Hercules into town to pick up some supplies. Despite trying to refrain him from helping the villagers, Hercules accidentally ends up causing chaos in the small village he lives in, causing all the villagers to jeer him and his father. Feeling ashamed for his actions, Alcmene and Amphytyron decide to reveal the medallion they hid from Hercules since he was an infant, revealing that he is actually related to the gods and explaining why he has superhuman strength. Hercules decides to set out and travel to the temple of Zeus to find out how he is related to the gods.

Amphytyron and his wife do not appear again until after Hercules saves Thebes from the Hydra, where they are shown briefly celebrating there success of their adopted son, which not only made him rich, but also themselves as well.

They are then seen again after Hercules saves Megara and Olympus and defeated Hades, where they join Hercules, Meg, Philoctetes, and Pegasus in watching as Zeus constructs a constellation of Hercules and fulfilling Phil's lifelong dream after one of the citizens shouts "That's Phil's boy!". 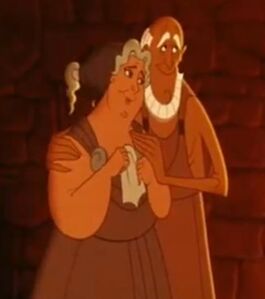 Amphytyron with his wife Alcmene.
Add a photo to this gallery

Retrieved from "https://hero.fandom.com/wiki/Amphytyron_(Disney%27s_Hercules)?oldid=2038823"
Community content is available under CC-BY-SA unless otherwise noted.