Amu Hinamori is a character in the manga and anime series Shugo Chara!, and the main protagonist of the story.

She is voiced by Kanae Itō also voiced Yui from Sword Art Online.

Amu Hinamori grew up with a tough character on the outside and everyone in school labels her as "cool and spicy," but deep down she is very hesitant and timid. One of the reasons that she has this image is because her mother dresses her in gothic and cool clothing. Another reason is because on the first day of school she tried introducing herself, but ended up introducing herself in way where it seemed like she was cool and confident.

Amu has short, smooth pink hair which half of is styled into a ponytail and has honey-golden (Light Brown) eyes. She has a kinda "punk" like way of dressing, and usually wears X-shaped clips. At the start of the series, Amu usually has a cold and stoic expression on her face, though as the series progresses, she is shown smiling more frequently, because she start a relationship with Ikuto.

Amu is extremely shy and self-denying, but also kind hearted and learns the philosophy that comes with her life. She is also very caring and responsible, though she can also be a bit airheaded and often forgets to do her homework. Her parents entrust her with the care of her little sister whenever they're unavailable.

When Amu wishes for the courage to become her would-be self, three colorful eggs appear. When they hatch, they reveal Amu's Guardian Characters: Ran, Miki, and Su.

Amu becomes a member of the Guardians, the school's student council, and discovers that each member has a Guardian Character. Amu's position with the Guardians is the Joker. Her task as the Joker is to search for and purify X Eggs and X Characters (also, in the second season, she purifies Mystery Eggs, the corrupted forms of people's would-be selves). Ran, Miki, and Su help Amu with her task through a process called Character Transformation, which is enabled by the Humpty Lock and grants Amu special abilities depending on the Guardian Character. Later on, Amu also creates a fourth egg, known as Diamond. In the second season, when Amu shows her true potential, the Humpty Lock increases in power. Thus, new transformation scenes are used...

Amu's main love interests are Tadase Hotori and Tsukiyomi Ikuto. Throughout the first half of the series, Amu had a crush on Tadase and blushed every time she was in his presence. She initially regarded Ikuto as a jerk and pervert, but she grew close to him as he aided her countless times. When Ikuto first confesses his love to her, she thinks he is teasing her and dismisses it. When Tadase asks Amu if it is okay for him to fall in love with her, she is thrilled at the progress in their relationship but soon finds herself drawn to Ikuto. She was saddened when Ikuto decided to leave in search of his father. Because of this, she realizes that she truly loves Ikuto. After he confesses to her and kisses her close to the lips, she refuses to admit her feelings for him, which prompts Ikuto to make a deal with her that he will get her to fall in love with him. In chapter 48, Amu confesses to Tadase's older self that she had liked Tadase for his outer character. Although they have a much better relationship than before, Amu remains stubborn about her feelings for Ikuto. In the final chapter of Shugo Chara Encore, she is happy to reunite with him and is seen holding hands with him at Sanjou and Nikaidou's wedding. Amu's primary rival is Utau Hoshina, Ikuto's younger sister, who is jealous that Ikuto shows an interest in Amu instead of her. They soon become good friends after Utau leaves Easter. In the end, she chooses Ikuto in the manga. However, it is heavily implied that she ends up with Tadase in the anime.

Amu ventures to the Eggs' Cradle, a place where unborn and "lost" Shugo Chara reside, in order to search for four coloured shards representing each of her Shugo Chara in an attempt to bring Ran, Miki and Su back. In chapter 44, Diamond tells Amu that Ran, Miki and Su have "disappeared" and that she will help Amu find them as her "navigator". Diamond becomes Amu's guide in the Eggs' Cradle in Amu's search for the four coloured shards. She finally comes to terms with the loss of her Guardian Characters at the end of the journey, however as she returns she realizes that she has Ran, Miki, Su and Diamond back in Egg form much to her relief and later joy as they are born again later in Shugo Chara Encore. 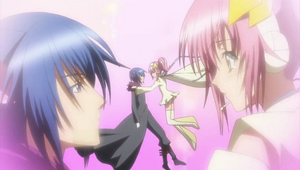 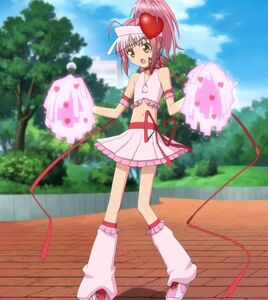 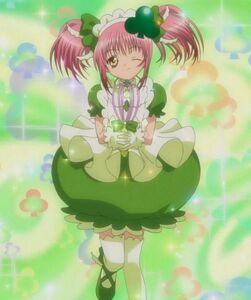 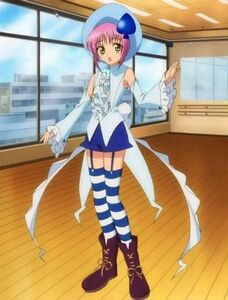 Retrieved from "https://hero.fandom.com/wiki/Amu_Hinamori?oldid=1669248"
Community content is available under CC-BY-SA unless otherwise noted.