Not to be confused with Sailor Mercury, also known as Amy Anderson.

Love Interest; Pure of Heart
Amy Anderson is the deutoragnist and the love interest of Paul Blart in Paul Blart: Mall Cop.

She is played by Jayma Mays.

She wasn't seen when she worked at the mall where she had her own place Unweaveable who sold wigs. She hung out with a pen seller named Stuart while Amy became fond of Paul Blart as well as he became fond of her.

Amy was one of the hostages when a band of thieves lead by Veck Simms stormed the mall. Paul was able to save Amy from being smuggled to the Cayman Islands and Amy married Paul later on at the end.

In Paul Blart 2, they have been married for 6 days until she want a divorced which it hurt Paul so much and it's unknown why she divorced him and she wasn't seen again. 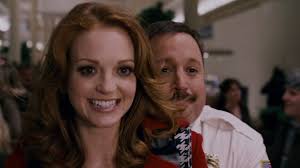 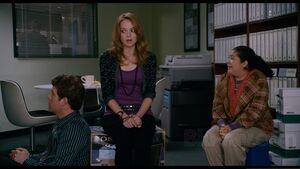