Being with Tahiri Veila.
Being with his family.
Working on the Millennium Falcon with his father.
Taking machines apart and reassembling them.
Dueling with lightsabers.

To save the Jedi (succeeded).
To destroy the voxyn queen (succeeded through his brother).

Anakin Solo was a major protagonist in the New Jedi Order series until his death in Star by Star, at which point, his brother Jacen Solo took up the mantle of main protagonist.

He is the son of Han Solo and Leia Organa, younger brother to Jacen and Jaina Solo, nephew of Luke and Mara Jade Skywalker, and cousin of Ben Skywalker. He was named after his grandfather, and fears becoming a Sith like his namesake. He died during the Yuuzhan Vong War, causing him to be mourned by his family and friends. Following his death, Anakin appeared twice as a ghost: first in Traitor, then in Fate of the Jedi: Abyss. After his brother's fall to the dark side, Anakin became the namesake for Lord Caedus's flagship.

He was created by Tom Veitch, and first appeared in the second book of the Jedi Academy Trilogy: Dark Apprentice in June of 1994.

Born six years after the death of his grandfather Anakin Skywalker, Anakin Solo was the youngest of Han Solo and Leia Organa Solo's three children, and the strongest in the Force.

Anakin was born very soon after his parents and twin brother and sister were rescued from New Alderaan. They had just arrived at the New Republic base, traveling to the abandoned floating space city of Nespis VIII, when Organa Solo began to go into labor. And it was short time later, when their parents returned with other New Republic officials to Coruscant, that infant Anakin and the twins, Jacen and Jaina, were taken to the faraway world of Anoth to be hidden in a heavily guarded facility and overseen by Organa Solo's assistant, Winter.

At the age of two, the twins went to Coruscant, but the six-month-old Anakin was too young and too susceptible to the influences of the dark side of the Force. Despite precautions, Anoth was compromised, but an attempted kidnapping of Anakin was foiled.

Anakin, with icy blue eyes and unruly brown hair, was finally brought to Coruscant and grew up happily, playing in the corridors of New Republic power with Winter, C-3PO, or the Wookiee Chewbacca looking after him and the twins. When he was three and a half years old, Anakin and the twins were kidnapped by Lord Hethrir and taken to the Crseih Research Station. Anakin barely escaped the fate of having his spirit fed to the dark side creature called Waru.

As Anakin grew older, his Force powers became more evident. His gift for mechanics was revealed when he took apart and reassembled computers at the age of five. Anakin figured prominently in the discovery and reactivation of Centerpoint Station during the first Corellian insurrection. Anakin started attending his uncle Luke Skywalker's Jedi Praxeum on Yavin IV when he was only eleven years old - his siblings didn't attend until they were thirteen. Around this time, Anakin befriended fellow Jedi trainee Tahiri Veila and Jedi Master Ikrit, the latter of whom became a mentor for him and Veila.

Anakin, as well as his brother Jacen, trained directly with Skywalker, when Luke began moving the new Jedi Knights back to the pre-Empire format of teaching. The two brothers had different ideas on what the future of the Jedi should be. Jacen believed in the spiritual aspects of the Force, while Anakin held to its physical uses. They clashed often, claiming their intense lightsaber duels were simply training.

When the Yuuzhan Vong invaded the galaxy, Solo returned to Centerpoint Station. The New Republic hoped to use the repulsors aboard the massive station to wipe out the Yuuzhan Vong fleet, but Solo refused to be the wielder of such power. His cousin Thrackan Sal-Solo took the shot instead, but only succeeded in destroying most of the New Republic's Hapan allies at Fondor.

In the wake of the Battle of Duro, where his brother Jacen wounded Tsavong Lah, the Yuuzhan Vong launched a bounty on the heads of the Jedi, particularly Jacen. In order to protect the Praxeum, Solo fled to Yavin IV to help Veila and the Solusars defend against the Peace Brigade. In the fight, Ikrit was killed and Veila was taken captive by Master Shaper Mezhan Kwaad. In an effort to rescue his friend, Solo formed an unlikely friendship with former Yuuzhan Vong warrior Vua Rapuung. Once he had reached Veila, Rapuung sacrificed his life to ensure Solo and Veila's escape.

Following this, Solo joined Veila and Jedi Knight Corran Horn, in which disobeyed Horn's direct order, hoping to rescue a Jedi. Using the information give to him by this Jedi, Solo hijacked Horn's ship and piloted for Yag'Dhul, where the three Jedi had an encounter with Yuuzhan Vong Executor Nom Anor. During this time, Solo and Veila realized their relationship was progressing to far more than just friends after they shared a private kiss. Later, Solo was present for the birth of his cousin Ben Skywalker.

As Solo trained more with Skywalker, he grew stronger and more respected among the Jedi. After the Yuuzhan Vong created the savage voxyn to hunt down Jedi (among them the Twi'lek Numa Rar and the Chironian Lusa), Solo was chosen to lead the Myrkr strike team to eliminate the voxyn queen. However, once aboard the Baanu Rass, Solo took an amphistaff wound to the abdomen.

His connection to the Force remained strong, and her gathered energy around him like a magnet. Solo became a glowing extension of the Force itself, almost invincible as he cut down Yuuzhan Vong warriors in order to get his comrades closer to the voxyn queen. The intense energy consumed him, and Solo's physical form radiated an intense light shortly before his death. Solo's body was laid to rest on Hapes.

Shortly after the fall of Coruscant, Anakin appeared to his brother Jacen as a Force ghost, in which he helped his elder brother come to terms with his death and the insecurity Jacen was having about his place in the Force. During the conversation, Jacen pointed out that Anakin had always seem so sure of himself than Jacen ever was. At the end of the war, Jacen would reach a oneness with the Fore, similar to the one his brother reached, in his duel with Onimi.

During the Second Galactic Civil War, Thrackan Sal-Solo once more tried to gain power over Centerpoint Station. With the death of Anakin, this seemed impossible. However, Sal-Solo got around this by building a human replica droid, Anakin Sal-Solo. This droid not only looked like Solo, but it also believed it was him. The droid was destroyed by Jedi Padawan and young cousin to Anakin, Ben Skywalker, now an apprentice of Solo's brother Jacen, on a mission to sabotage Centerpoint Station.

Later, as Jacen began to gain more power within the Galactic Alliance, he christened his Star Destroyer flagship, the Anakin Solo, something that angered Solo's parents and sister. As Jacen transformed into the Sith Lord Darth Caedus, Solo played a major role in Caedus's corruption of Veila, when he flow-walked back to Solo's death, implicating that he could alter time and bring Solo back. After watching memories of Solo repeatedly, Veila succumbed to the dark side as Caedus's Sith apprentice.

Following Caedus's death, Luke and Ben Skywalker encountered Anakin's spirit on their journey to discover why Caedus made the choices he did. 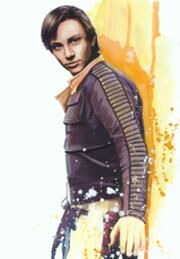