Heroes Wiki
Register
Don't have an account?
Sign In
Advertisement
in: Digimon Heroes, Deceased, Heroes from the Past,
and 22 more

Elemental Hero
AncientBeetlemon(AncientBeatmon in Japan) is one of the past heroes, who defeated Lucemon after saving the Ancient Digital World from the forces of darkness. An Ancient Insect-Type Digimon represents thunder/lightning (雷; ikazuchi).

AncientBeetlemon is a Mega-Level Digimon that is similar to various species of insects such as rhinoceros beetles and stag beetles . It has a falx on both of its arms and an wings on its back

One of the Ten Legendary Warriors who saved the ancient Digital World, this Digimon bears the attribute of 'Thunder'. One of the first Mega-leveled beings to exist in ancient times, its form is similar to that of various insects such as rhinoceros beetles and stag beetles. Its outer shell's hardness rivals that of Chrome-Digizoid, so that its sickle-shaped arms can lift objects hundreds of times its own mass easily, yet are light enough for it to cut through said objects. AncientBeetlemon's attribute was passed down to Insect type Digimon. Its special attacks are "Calamity Thunder", a super-electrical discharge attack so powerful that it can create super-disasters, and "Tera Blaster", an attack 1,000 times more powerful than the "Giga Blaster" attack. 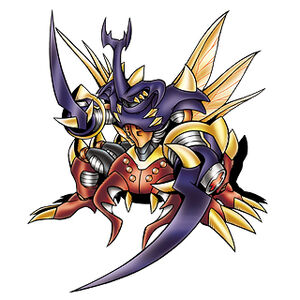 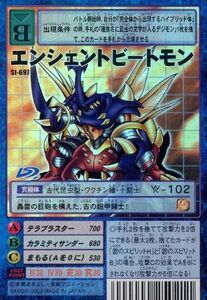