Elemental Hero
AncientKazemon (AncientIrismon in Japan) is a heroine, who has successfully defeated Lucemon to save the Ancient Digital World, along with the rest of the Ten Legendary Warriors. An Ancient Bird Man-Type Digimon represents wind (風; kaze).

AncientKazemon is a Mega-Level Digimon. She bears a resemblance with a beautiful woman who has a rapier on her hands (right/left); while the feather-like armour is worn on both of her shoulders. The pink bra covered her breasts. The multi-colored feather helmet is equpped in her head.

She died along with the other Ten Legendary Warriors when they defeated Lucemon years ago and imprisoned him in the center of the Digital World. She created the Spirits of Wind, Kazemon and Zephyrmon.

One of the Ten Legendary Warriors who saved the Ancient Digital World, it bears the attribute of "Wind". A Mega who lived a long time ago, it has golden wings and a beautiful rainbow-colored form. It runs across the sky with its vast golden wings and it is said that by creating many rainbow bridges, it is able to move about freely, even over water and land. AncientKazemon's beauty and capabilities have been passed down to many "Bird Man Digimon" and "Fairy Digimon". Its special attacks are "Storm Gazer", which generates an continuous super-huge storm, and "Rainbow Symphony", fires a super rainbow-colored shiny laser that melts everything it touches. 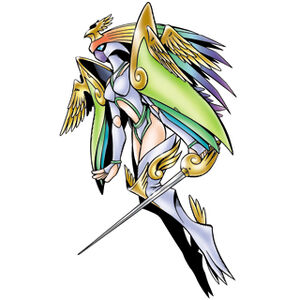 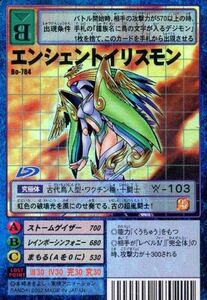