Heroes Wiki
Register
Don't have an account?
Sign In
Advertisement
in: Digimon Heroes, Anime Heroes, Heroes from the Past,
and 20 more

Elemental Hero
AncientMegatheriummon is an ancient hero, who was responsible for defeating Lucemon to save an Ancient Digital World from the reign of destruction and apocalypse. An Ancient Beast-Type Digimon represents ice (氷; koori).

AncientMegaTheriummon is a Mega-Level Digimon that ressembles Pelorovis with the white fur and 6 smoke cylenders on its back.

He died along with the other Ten Legendary Warriors when they defeated Lucemon years ago and imprisoned him in the center of the Digital World. Hhe created the Spirits of Ice, Kumamon and Korikakumon.

One of the Ten Legendary Warriors, this ancient Digimon bears the attribute of 'Ice'. One of the first Mega-leveled beings to exist in ancient times, this brave and heroic warrior is fully adapted to live on intensely cold, frozen soil at very-low temperatures. Its absolute-zero attacks can freeze the activity of atoms around it, and it can easily shatter frozen gigantic icebergs. Today, most of AncientMegatheriumon's abilities have been passed down to Icy Snow and Mammal type Digimon. Its special attacks are "Great Snowplow", a tackle attack which can destroy even frozen icebergs, and "Freezing Blizzard", a super-below zero snowstorm. 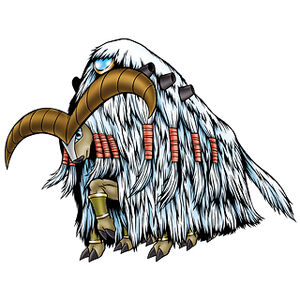 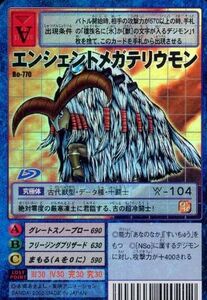