Elemental Hero
AncientMermaimon is an aquatic heroine, who had successfully destroyed Lucemon to save the Ancient Digital World, along with the rest of the Ten Legendary Warriors. An Aquatic Beast Man-Type Digimon represents water (水; mizu).

AncientMermaimon is a Mega-Level Digimon. She looks like the appearance of the beautiful mermaids in mythology with the golden trident and a silver, long hair.

She died along with the other Ten Legendary Warriors when they defeated Lucemon years ago and imprisoned him in the center of the Digital World. She created the Spirits of Water, Ranamon and Calmaramon.

One of the Ten Legendary Warriors, who saved the Ancient Digital World: this Digimon bears the attribute of 'Water'. One of the first Mega-leveled beings to have existed since ancient times, it is the protector of the Net Ocean, one of many Digimon birthplaces. It rules over every inch of the vast Net Ocean, and it can manipulate water as if they were hands and feet, creating currents and tsunamis. It's been rumored, but not confirmed, that AncientMermaimon's anger can sink islands and continents with just one touch. Many Aquatic type Digimon consider AncientMermaimon to be their goddess, and have thus inherited her abilities. Its special attacks are "Crystal Billow", which fires out super-hard crystals like a machine gun, and "Great Maelstrom", which generates a huge maelstrom that engulfs everything in its path in water. 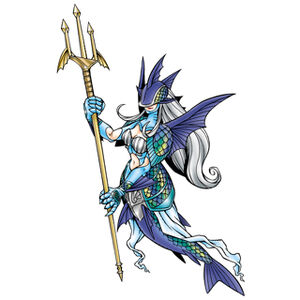 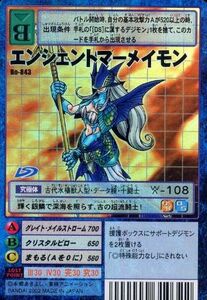