Elemental Hero
AncientSphinxmon is one of the past heroes in Digimon Frontier, an Ancient Mythical Animal Digimon who is very responsible for defeating Lucemon with the rest of the Ten Legendary Warriors before saving an Ancient Digital World together. He represents Darkness (闇; yami).

AncientSphinxmon is a Mega-Level Digimon. The entire body of the lion-like mythical animal that is colored black. It has a golden wings and lance-tail in its back.

He died along with the other Ten Legendary Warriors when they defeated Lucemon years ago and imprisoned him in the center of the Digital World. He created the Spirits of Wind, Kazemon and JaegerLoweemon.

Bearing the attribute of "Darkness", it is one of the Ten Legendary Warriors, who saved the Ancient Digital World. An Ultimate said to have existed in the ancient past, it was born from darkness and is thus a bipolar counterpart of AncientGarurumon. Though it takes on some form of living beast, it rules over destruction and extermination, and it is feared as the "Deadly Dark Beast". AncientSphinxmon's abilities have now been inherited by "Mythical Beast" and "Demon Beast" type Digimon. Its special attacks are "Dark Blast", wherein it emits a beam of destruction whilst roaring, and "Necro Eclipse", the ultimate extermination attack wherein it envelopes the enemy in mortal darkness. 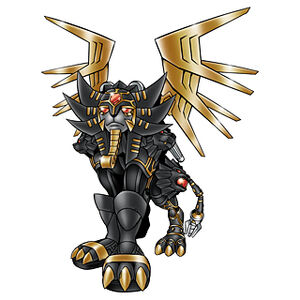 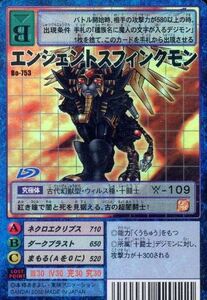