Elemental Hero
AncientTroiamon is a wooden horse hero, who had successfully defeated Lucemon to save the Ancient Digital World, along with the res of the Ten Legendary Warriors. An Ancient Plant-Type Digimon represents wood(木; ki)

AncientTroiamon is a Mega Level Digimon that ressembles a giant wooden horse with several cannons.

One of the Ten Legendary Warriors who saved the Ancient Digital World, it bears the attribute of "Wood". A Mega who lived a long time ago, it boasts the biggest size of all Ancient Digimon. A variety of mechanisms have been planted on its body, allowing it to perform tricky attacks and movements. AncientTroiamon's capabilities have been passed down to many "Plant Digimon". Its special attacks are "Epeius Gimmick", which simultaneously activates every mechanism on its body, and "Surprise Cannon", which begins to fire artillery shells from the enormous cannons on its mouth and chest. 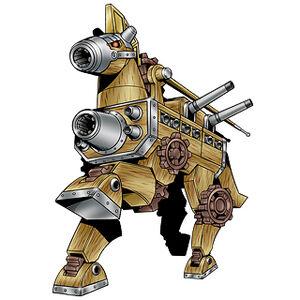 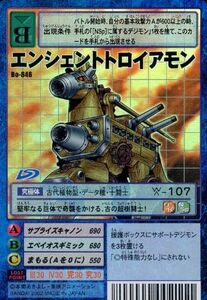 AncientTroiamon Japanese Card
Add a photo to this gallery

Retrieved from "https://hero.fandom.com/wiki/AncientTroiamon?oldid=2095444"
Community content is available under CC-BY-SA unless otherwise noted.