Elemental Hero
AncientVolcamon is one of the past heroes in Digimon Frontier, who seeks to defeat Lucemon together with the rest of the Ten Legendary Warriors. An Ancient Mineral-Type Digimon represents Earth (土; tsuchi).

AncientVolcamon is a Mega-Level Digimon. It has meteor-like body that resembles a volcano with arms, muscles, feet. Despite his power getting angrier, he will be able to calm down.

One of the Ten Legendary Warriors who saved the Ancient Digital World, this Digimon bears the attribute of 'Earth'. It's amongst the most powerful of all Ancient Digimon. Hot magma is stored inside its body, and is the source of its strong power. Many rock-based Digimon, particularly of the Ore and Mineral types have inherited its abilities. Its special attacks are "Atomic Bomber", which uses a strongly intensive lariat of explosive powers and drives it into the enemy with its strong driving force, and "Supernova", which generates antimatter within its body, creating a super-explosion akin to a small Big Bang.

Supernova: Generates antimatter within its body, which causes a super-detonation comparable to a tiny Big Bang.

Atomic Bomber: Detonates the volcano on its back, which propels it into a super-strong lariat.

Big Bang Fire: Fires a stream of magma from its back. 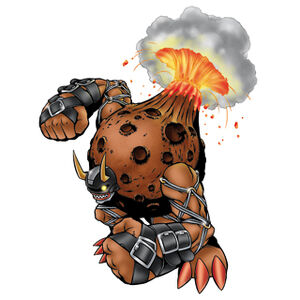 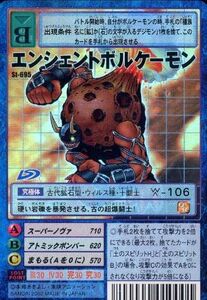 AncientVolcamon in Japanese Card
Add a photo to this gallery

Retrieved from "https://hero.fandom.com/wiki/AncientVolcamon?oldid=1757076"
Community content is available under CC-BY-SA unless otherwise noted.