Heroes Wiki
Register
Don't have an account?
Sign In
Advertisement
in: Digimon Heroes, Deceased, Heroes from the Past,
and 25 more

Elemental Hero
AncientWisemon is a wizardry hero, who had successfully defeated Lucemon to save the Ancient Digital World, along with the rest of the Ten Legendary Warriors. An Ancient Mutant-Type Digimon represents steel (鋼; hagane).

AncientWisetmon is a Mega-Level Digimon that resembles Zhuge Liang with the ghostly floating mirror and a purple fan.

One of the Ten Legendary Warriors who saved the Ancient Digital World, this Digimon bears the attribute of 'Steel'. One of the first Mega-leveled beings to have existed only ancient times, it is the ultimate wise man and the first prophet of the Digital World. It is said that he is the keeper of the Akashic Records, a database that stores sources of knowledge from incredibly old periods of time, and it's proposed that there is nothing that AncientWisemon knows nothing about. This sage not only has a mind full of ancient wisdom, but it can also foresee into the future. Moreover, it is said that the mirror on AncientWisemon's body acts as a gateway to the spirit world. Many Mutant type Digimon have inherited its abilities. Its special attacks are "Laplace's Demon", which summons a monstrously powerful demon from another world, and "Elder Sign", which aligns this world with another through its ultimate wisdom before confining the enemy into the realm for all eternity. 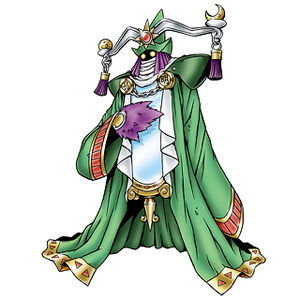 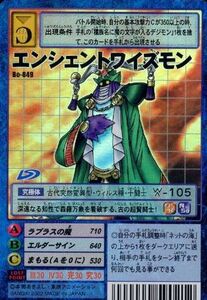