To serve the Martin family (formerly)
To become human (succeeded)

Andrew Martin is the main protagonist of the 1976 book The Bicentennial Man and it's 1999 film adaptation.

He is a robot who desires to be human.

He is played by the late Robin Williams.

In the year 2005, the NDR series robot "Andrew" is introduced into the Martin family home to perform housekeeping and maintenance duties. The family's reactions range from acceptance and curiosity, to outright rejection, and deliberate vandalism by their surly older daughter, Grace, which leads to the discovery that Andrew can both identify emotions and reciprocate in kind. When Andrew accidentally breaks a figurine belonging to "Little Miss" Amanda, he carves a replacement out of wood. The family is astonished by this creativity and “Sir” Richard Martin takes Andrew to his manufacturer, to inquire if all the robots are like him. The CEO of the company sees this development as a problem and wishes to scrap Andrew. Angered, Martin takes Andrew home and allows him to pursue his own development, encouraging Andrew to educate himself in the humanities.

Years later, following an accident in which his thumb is accidentally cut off, Martin again takes Andrew to NorthAm Robotics for repairs, ensuring first that Andrew's personality will remain un-tampered with. Andrew requests that, while he is being repaired, his face be altered to convey the emotions he feels but cannot fully express. Andrew eventually asks for his freedom, much to Martin's dismay. He grants the request, but banishes Andrew so he can be 'completely' free. Andrew builds himself a home and lives alone. In 2048, Andrew sees Martin one last time on his deathbed. Martin apologizes for banishing him.

Andrew goes on a quest to locate more NDR series robots to discover if others have also developed sentience. After years of failure he finds Galatea, an NDR robot that has been given feminine attributes and personality. These, however, are simply aspects of her programming and not something which she spontaneously developed. Galatea is owned by Rupert Burns, son of the original NDR robot designer. Burns works to create more human-looking robots, but is unable to attract funding. Andrew agrees to finance the research and the two join forces to revolutionize robotics. Andrew designs new prosthetic organs for the robots, which can also be used in humans. He maintains contact with Amanda, who grows up, marries, divorces and dies. Eventually, Andrew becomes human enough to fall in love with Amanda's granddaughter, Portia and, ultimately, she falls in love with him.

Over the course of the next century, Andrew uses his prosthetics in an attempt to turn himself into a human, complete with artificial skin, hair and a nervous system. He petitions the World Congress to recognize him as human, which would allow him and Portia to be legally married, but is rejected; the Speaker of the Congress explains that society can tolerate an everlasting machine, but argues that an immortal human would create too much jealousy and anger.

Andrew works with Burns to introduce blood into his system, thereby allowing him to age, and thus he begins to grow old alongside Portia. Andrew again attends the World Congress, now appearing old and frail, and again petitions to be declared a human being.

On his death bed, with Portia beside him, Andrew watches as the Speaker of the World Congress announces on television the court's decision: that Andrew Martin is officially recognized as human, and that aside from "Methuselah and other Biblical characters," is the oldest human being in history at the age of two-hundred years old. The Speaker also validates the marriage between Portia and Andrew. Andrew dies while listening to the broadcast, and Portia orders their nurse Galatea, a now recognizably-human android, to unplug her life support machine. The movie ends with Portia about to die hand-in-hand with Andrew, as she whispers to him "See you soon." 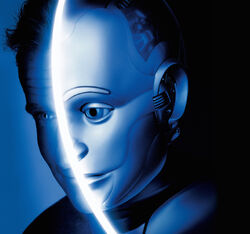 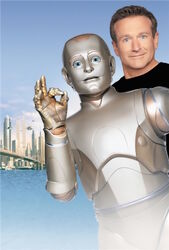 Add a photo to this gallery
Retrieved from "https://hero.fandom.com/wiki/Andrew_Martin?oldid=1709366"
Community content is available under CC-BY-SA unless otherwise noted.