Android 16 is one of the androids created by Dr. Gero with a peaceful disposition and a hero from Dragon Ball Z.

He is voiced by Hikaru Midorikawa in Japanese, Jeremy Inman (Funimation) and Scott McNeil (Ocean Group) in English.

Though Dr. Gero built Android 16, he did not complete his programming and thus never activated him, fearing what he might do something like destroy Androids 17 and 18. But after Android 20, with the Z-Fighters hot on his heels, activated #17 and #18, #18 became interested by the dormant 16. She wanted to activate him and #20 commanded her to stop, only to get destroyed by #17. Future Trunks arrived and tried to stop #17 and #18 as they were activating #16 with his Buster Cannon attack, but it did nothing. The android trio set out to find and kill Goku as their programming dictated. They were quickly confronted by Vegeta and #17 and #18 tried to get #16 to fight him, wanting to see his abilities. However he refused due to being more interested in watching a group of birds nearby and #18 stepped up to fight Vegeta instead. Future Trunks, Piccolo, Kuririn, and Tenshinhan arrived to help Vegeta and #17 asked #16 if he wanted to join in. #16 refused again as #17 accepted and when the fight was over, #16 was saddened when the birds flew away due to the noises from the battle.

16 left with #17 and #18 to find Goku and eventually arrived at Kame House where Piccolo agreed to fight #17 on a nearby island. However, the fight was interrupted by Cell, who had grown strong enough that he believed he could absorb #17 and #18, who managed to fight Piccolo off and went after #17.

#16 intervened and stated that he was roughly equal to Cell in terms of strength and speed, so he would be the one to stop him. The two battled and #16 managed to rip Cell’s tail off, hoping to leave him unable to absorb #17 and #18. But when the bio android regenerated his tail, #16 decided to take more drastic measures and removed his hands, revealing cannons within his arms. He fired them at

Cell, unleashing his Hell's Flash on him, but he managed to survive and snuck up on #17, successfully absorbing him. Cell transformed into his Semi-Perfect form and proved much stronger than #16, easily dealing with his attacks and badly damaging him. With Tenshinhan’s help, #16 tried to get #18 to safety only to be followed by Cell.

However, Vegeta and Future Trunks arrived, having trained in the Room of Time and Space, and the two androids watched as Vegeta managed to easily take on Cell. However Vegeta let the android absorb #18 as well and attain his Perfect form and #16 could only watch Vegeta fight him. At first, he thought the Saiyan could win, but upon seeing Cell’s true power, he knew everyone was doomed. After Cell defeated Vegeta and Trunks, before leaving to organize his Cell Games, #16 approached Kuririn. The android told him that he wanted to help fight Cell, but he needed repairs. While Future Trunks did not trust #16 since he was an android,

Kuririn calmed him down and brought #16 to Capsule Corp where Bulma and her father repaired him. During these repairs, Bulma found a bomb inside the android, most likely intended to be used against Goku and not wanting to take any chances, removed it.

After his repairs were completed, #16 went to the Cell Games, arriving shortly before the Z-Fighters. He thanked Kuririn for helping him get repaired and introduced himself to Goku.

#16 then watched Goku fight Cell, before eventually making his move to take out Cell himself. As he was fighting Son Gohan, #16 grabbed the bio-android from behind, intending to use his self-destruct to destroy them both, not realizing Bulma had taken it out. When #16 realized that it had been disabled, Cell blasted him to pieces with only his head remaining intact. He had Mr. Satan throw him over to

Gohan and encouraged him to let loose his anger so as to protect everyone. But after Cell crushed #16’s head, finally destroying him, Gohan became so enraged that he finally transformed into a Super Saiyan 2. It is unknown if #16 was brought back by the wish that the Z Warriors made on the Dragon Balls to bring back everyone killed by Cell and fix the damage caused by the Cell Games.

#16’s most notable trait is his usually peaceful nature to the point that he preferred interacting with nature as opposed to listening to Dr. Gero’s orders. He talks very little and is the only person who has stated that #17 and #18 are not actually evil. Though #16 does not like fighting, he will immediately engage anyone who poses a threat to the peace of the planet.

16 is the most powerful of the androids of his series, which may be because he was created without any human traits. Being an android, he has superhuman strength, speed, and durability and endless endurance and energy. #16 can fly and fire energy blasts and has a device built into his eyes that allow him to locate and gauge energy signatures. #16 also has a pair of cannons built into his arms that can fire extremely powerful energy blasts, known as the Hell's Flash, and to use them, he removes his hands, tucking them under his armpits. #16 can fire his hand like a missile and has a powerful self-destruct device inside his body, which was deactivated by Bulma.

Android 16 as he appears in Dragon Ball Z: Budokai Tenkaichi 3. 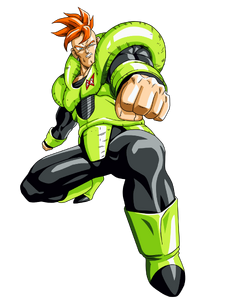 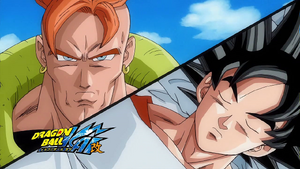 Android 16 and Goku in eyecatch 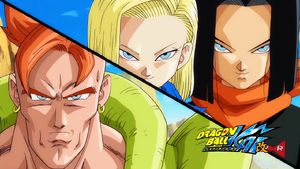 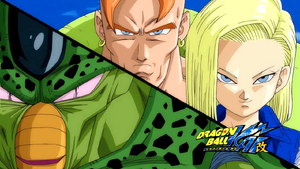 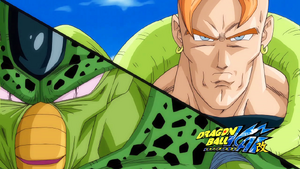 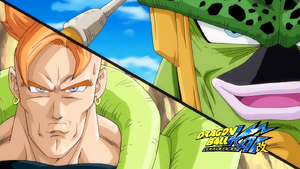 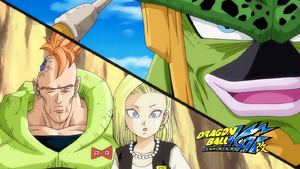 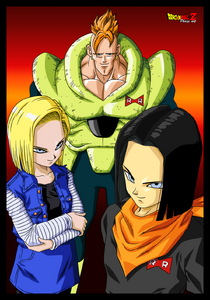