Bio-Android
Member of the Z-Fighters (currently)

Talking.
Befriending with her friends.

Good Half: To stop her evil half from destroying the universe.

NOTE: This article is about her good side, for her evil side, see this page.

Android 21 is an Android and the main protagonist who appears in the videogame Dragon Ball FighterZ. Her intelligence rivals that of Dr. Gero, though she may be even smarter than he was.

She was voiced by Hōko Kuwashima in the Japanese version, and by Jeannie Tirado in the English version.

Before the split and transformation to her true form, Android 21 (Good) looks identical to her original self: Android 21 is described as a busty scientist with glasses and long bushy auburn hair. She has a gold ring on her left middle finger, and black nails. She wears a pair of hoop earrings, a sleeveless, blue and red short dress with black stockings, black arm sleeves, and blue and red heel boots. Her eyes are similar to those of Dr. Gero's other androids, such as Androids 17 and 18.

In her true form, Android 21's skin turns pink, her ears pointed, her eyes red with black sclera and gains a tail. Her attire changes to a black tube top, keeping the black arm sleeves, and also gaining white baggy pants. It's noted that she mostly resembles a Majin in this form.

Her appearance in her true form is the result of her having all of the traits of the Z-Fighters, Frieza, Cell, and Majin Buu rolled into one.

The good Android 21 represents her original self's good side, similar to how Good Buu represents the good aspects of the Innocent Buu. Though she retains her hunger she is better able at controlling it due to the removal of her evil half and her link with the human soul that had been bonded with Android 18.

After splitting into two halves, she seems to be incredibly apologetic, even apologizing as she attacks mid-fight, and chooses to work with the heroes to fix her wrongdoings. Though she mourns the loss of Android 16, his death and her resulting fission has made her determined to stop her evil half as a way of honoring his memory. As such, her good self was willing to sacrifice herself in order to help stop her evil self, much to Android 18's reluctance, while also thanking the soul in her for everything it had done for her. In the same setting, Android 21 was shown to trust 18, passing on the soul to her. In spite of this, she is still ravaged by her hunger and has a natural desire to eat her allies, leading 21 to fear herself. This fell to reason why she chose to sacrifice herself, not only to protect the allies she grew to care for, but to prevent anyone else from getting hurt which is presumably born from her guilt over the death of Android 16. Interestingly, she shares this self sacrificing aspect of her personality with her adoptive son, Android 16. Additionally like Android 16, she is a gentle soul who dislikes fighting in general, though will stand up to protect innocents, as well as her friends and loved ones. It is implied by Beerus and Whis that had she survived the destruction of her evil half, she would have ultimately succumbed to her hunger. Thus, her sacrifice was ultimately for the greater good, though it is possible she could have learned to suppress it completely, though simply chose to not risk even the slightest possibility of her losing control, for fear of destroying her allies as her original self had with Android 16.

She shares a strong bond with Android 17 and 18 due to their friendship with 16 and them sympathizing with her plight and her situation as being due to 21's human self being converted into an Android which Android 17 and 18 understand all too well. She views Majin Buu as a kindred spirit due to their similar backgrounds and love of sweets (those not made from living people) though she is not as focused on eating as her evil counterpart as she suggests to Majin Buu to defeat the enemy clones before eating the candy he offered to share with her, showing she is able to focus on the task at hand even when normal food is involved. She also retains her intelligence and knowledge of Dr. Gero's research as she was aware of the location of the remote capable of turning off the power suppressing wave machine, though her evil half managed to acquire and swallow it to prevent her from turning off the machine.

During one discussion with the soul, she reveals that she is technically "not even ten years old" and was built in the image of a human woman with the IQ of an adult, noting that she feels as though she missed out on her adolescence. She is also shown to be weary of Vegeta's temper as shown in a special dialog between her, Vegeta, and Gotenks when Vegeta admonished her along with Gotenks when they had become distracted, causing them both to fearfully do as he instructed and focus on the enemy.

Android 21's good side is her true persona and was the only persona that she had as a human. However, upon the addition of Majin cells to her, she began to develop an evil side. The two sides would fight for control over their shared body, with her hunger usually and mostly being the most dominant, even though 21 would often fight against her urges, not wishing to bring ill to anyone. Unfortunately, in the Super Warrior Arc and Enemy Warrior Arc t is implied that her good side was completely overcome by her hunger causing her evil nature to take over completely. As a result, her fission never occurs in these arcs and her original self is destroyed (by the Z Fighters in the Super Warrior Arc and by Goku, Frieza, and Cell in the Enemy Warrior Arc). 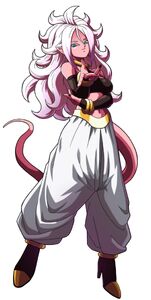 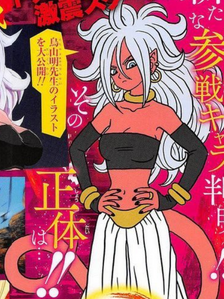 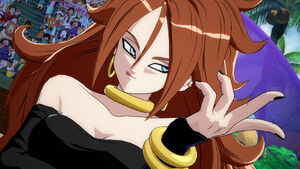 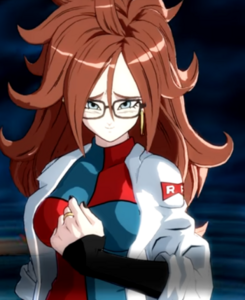 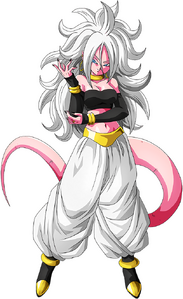 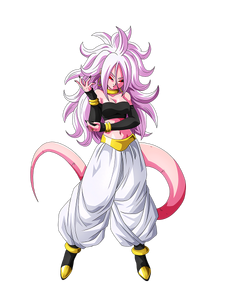 Evil persona (notice the difference in her eye color) 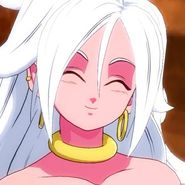