Android 8 is a android that takes on the form of a large, stocky man resembling Frankenstein's monster - whom he is presumably based off, with short dark blue hair, a large cylindrical cranium, thick brows, no visible eyebrows, large oval eyes with small pupils, a wide nose, a large jaw, and two stitched scars: one across his forehead, and the other on his left cheek. In Dragon Ball he wears a pale blue sweater underneath a navy blue suit, white socks and black loafers. In Dragon Ball Z, he wears a a green and yellow fur jacket over his suit. In Dragon Ball GT and The Path to Power he wears an orange sweater underneath a teal suit, which in turn is worn under a sheepskin waistcoat. Underneath his clothes, he wears a pair of blue boxer shorts.

Despite his brutish, menacing appearance, Android 8 is actually a kind, good-natured, placid, docile and peaceful individual who detests violence, refusing to follow the cruel orders of Ninja Murasaki and General White, which leads to them berating him as a "failure". However, despite his pacifistic nature, Android 8 would fight when angered, as seen when he punched General White out of the Muscle Tower after he had shot Goku.

In Attack of the Saiyans, Android 8 is temporarily brainwashed by General White which alters his personality turning him into a mindless brute that follows White's orders to the point of even attacking his old friend Goku and the Dragon Team alongside General White though he defeated which frees him of White's control causing him to revert back to his original personality.

Android 8 is the eighth of the Red Ribbon Androids created by Dr. Gero. In anime filler, since Gero had not yet been created as a character by the author it is said that Android 8 was created by Dr. Flappe, though after Dr. Gero's creation, various source materials have suggested that Dr. Flappe and Dr. Gero were colleagues both involved with Android 8's construction. Android 8 was an entirely artificial construct, though according to some sources he is a human-based model (like 17 and 18), more specifically created from a dead body.

Android 8 and Goku during the Red Ribbon Army Saga Being released from his cell, Android 8 is introduced by Ninja Murasaki, who intends to use him against Goku, after he and his brothers failed to defeat the much stronger Goku. However, 8 refuses to battle the child. When Murasaki threatens to detonate 8 via a remote control, Goku knocks the trigger out of his hand and knocks out Ninja Murasaki. Goku nicknames Android 8 "Eighter" (Hat-chan), and he becomes Goku's friend. When General White threatens the android with an ultimatum: kill Goku or the Jingle Village Chief will be shot, Goku decides to stop the torment by turning his back so that White may shoot him unopposed, and White shoots Goku, seemingly killing him. After witnessing his first friend get hurt, an enraged Android 8 punches White clean out of Muscle Tower's uppermost window. Afterward, Android 8 proceeds to destroy Muscle Tower, putting an end to at least part of the evil Red Ribbon Army. After eliminating the Army contingent in Jingle Village, 8 reveals that he discovered the Dragon Ball that the army was looking for and hid it, knowing that they intended to kill the villagers once it was found. Hearing this, the head of the village invites 8 to live among them, which he accepts.

Before Goku leaves the village, Goku, Android 8, and Suno set out to remove the Android Bomb implants in Android 8's chest. Suno informs Goku that they should visit Dr. Flappe, an expert in machines. After a brief confrontation with Ninja Murasaki, Dr. Flappe successfully removes the bomb.

Android 8 is seen again when he goes to rescue Suno after she falls victim to King Piccolo's assault on King Castle. Android 8's appearance in "Lost and Found" was his last appearance in the Dragon Ball anime.

Android 8 makes cameo appearances throughout Dragon Ball Z, the most prominent being during the Kid Buu Saga, when Goku is forming a Spirit Bomb and 8, along with his fellow villagers, supplies Goku with his energy to use against Kid Buu. The fact that he is alive at this time proves that completely artificial life can be revived by the Dragon Balls, as he appears to have been revived along with Earth's inhabitants after the planet's destruction by Buu.

Android 8 is very briefly seen in episode 40 of Dragon Ball GT, where he is transported off of Earth by Super Saiyan 4 Goku before it explodes due to the Black Star Dragon Balls.

The Path to Power

Android 8 appears in the film Dragon Ball: The Path to Power, which is a retelling of the early Dragon Ball story altered for theatrical purposes. Android 8 is first seen in Muscle Tower under the control of General White, who orders Android 8 to attack Goku, to which he does. Later, however, Android 8 comes to his emotional feelings and does not want to attack the boy, thus, General White deems Android 8 "a failure", and a waste of the millions of dollars spent on designing him. Goku manages to defeat General White with his Power Pole, saving Android 8's life before White can blow him up with his self-destruct device. Android 8 and Goku later play in the snow, where Goku names Android 8 "Eighter", delighting the latter. When Goku offers Eighter the chance to join him and his friends on their quest for the Dragon Balls, Eighter decides instead to stay behind and report the RRA members near the tower to the police. One major plot change is that Android 8 is later destroyed by the newly titled Commander Black of the "Black Ribbon Army" at the Red Ribbon Army Headquarters, which causes Goku to snap and push himself into a severely powered up state, allowing him to destroy the giant Battle Jacket that Black is inside, which ultimately kills Black.

After Commander Black is defeated, Goku uses the Dragon Balls to wish Android 8 back to life with the bomb inside of him removed.

Android 8 appears in the prologue when the narrator recaps the adventures and rigorous battles fought by Goku and his friends along with their journey to collect the 7 Dragon Balls to make a wish to Shenron whenever they needed them. 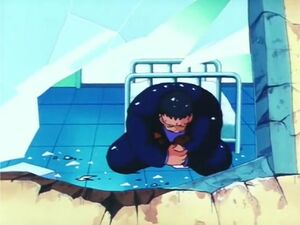 Android 8 surviving and protecting kids one of King Piccolo's blast.