Heroes Wiki
Register
Don't have an account?
Sign In
Advertisement
in: Heroes Of Folklore, Aliens, Mysterious,
and 16 more

Unknown; primarily seem to be motivated to protect humankind through unknown methods

The Andromedans are an alleged race of extraterrestrial beings hailing from the Andromeda system.

According to many believers, the Andromedans are bluish-violent in appearance whilst others refer to them as energy beings. Considering how it is commonly held as a fact that energy cannot be created, they are instead believed to be comprised of plasma. These race of humanoid beings bear striking resemblance to figures from ancient Egyptian hieroglyphics. They form an interstellar federation the Council of Andromeda which is subsequently also apart of the alleged Galactic Federation of Light. Most reports even imply that the history of the Andromedans' history on Earth dates back to the days of the worship of the Hindu gods alongside Ancient Egypt.

While their main initiatives are unclear, it is believed that they are primarily focused on assisting humanity in the hopes of encouraging spiritual growth. Some of their proposed plans amount to eradicating all malicious extraterrestrial life from the Earth and encouraging the use of electric cars. The Andromedan race is believed to be especially technologically advanced, so much so, it is often held that they could as much as destroy Earth if they saw it as the final option, particularly when it comes to dealing with hostile extraterrestrials such as the infamous Reptilians. Beyond this, the Andromedans are suggested as being truly benevolent and have the genuine desire to protect mankind. 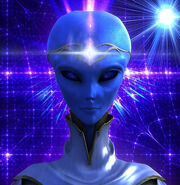