Founder and Leader of the Space Rangers

Spending time with his friends.
Being with Ashley.

Save the earth from evil threats.

Return his sister back to normal (Both succeeded).

Andros is the Red Space Ranger and the main protagonist of Power Rangers In Space. He is also Ashley Hammond's love interest.

Andros grew up with his sister, Karone, on the space colony of KO-35. However one day, she was kidnapped by the bounty hunter, Darkonda, and he swore to find her again. After becoming a teenager, Andros and his friend, Zhane, were chosen to become Power Rangers, Andros the Red Ranger and Zhane the Silver Ranger. The two were a great team but things went awry for them during an enormous assault on KO-35 by the forces of evil. During the battle, Zhane was badly injured by a monster and Andros placed him in a cryo-chamber on the Astro Megaship to keep him alive in the hope he would one day recover.

After the destruction of the Power Chamber and the loss of their powers, the four Turbo Rangers, Theodore Johnson, Carlos Vallerte, Ashley Hammond, and Cassie Chan head into space, hoping to find and free Zordon. However they accidentally find their way onto the Astro Megaship where they run into Andros, who initially mistakes them for intruders. After they help him fend off an attack by a squad of Quantrons, they offer to join him but he turns them away, telling them they knew nothing about surviving in space. However Alpha 6 convinces Andros to let them help him and he finds them in the clutches of Astronema. He frees them and gives them the other four Astro Morphers, allowing them to become the Blue, Black, Yellow, and Pink Space Rangers. After being attacked by a squadron of Veloci Fighters, Andros and his new teammates combine the Astro Megaship with the Astro Megashuttle to form the Astro Megazord. They then set out on a mission to find Zordon and protect Earth from Astronema.

Some time after this, Zhane is awakened from his cryo-chamber after the Megaship crashed. During their time together, Andros begins developing a relationship with Ashley Hammond. Though he is happy to see his friend again, Andros becomes jealous after he saw Zhane and Ashley spending time together. However the Silver Ranger convinces Andros that they are just friends so Andros is able to ask her out on a date. After a time, he finds out that Karone has grown up to become the Princess of Evil, Astronema. Andros manages to convince her to come to the side of good, but she is captured again and transformed to be pure evil by Dark Specter. He doesn’t have time to try and bring her back after Astronema creats the vicious Psycho Rangers.

Andros and his team destroy them, but they return and the Rangers manage to trap the Psychos in data cards. He later uses the final button of the Battlizer Gauntlet to access his Battlizer armor. However Dark Specter unleashes the forces of the United Alliance of Evil in an enormous galactic invasion.

During the battle, Andros sneaks on-board Astronema’s Dark Fortress and finds Zordon who tells him to shatter his energy tube which will unleash a wave of energy across the galaxy, destroying the evil forces, although this will also kill him. Astronema finds them and fights Andros who is unwilling to fight back but accidentally deflects a bolt of energy at her, seemingly killing her. Ecliptor finds out what had happened and fights Andros with Zordon insisting that that he destroy his energy tube. Finally the Red Ranger reluctantly did so, sending a wave of energy across the galaxy destroying the villains and transforming Rita Repulsa, Lord Zedd, Divatox, and Astronema into humans, reuniting Andros with his sister. Though at first he thinks of staying on KO-35, he decides to go back to Earth with the Space Rangers, Zhane, and Karone.

To the Tenth Power

Andros begins looking for the data cards that the Psycho Rangers are trapped on and tracks them to Terra Venture but they have already been freed. He saves Leo from Psycho Red and they go to rescue of the other Galaxy Rangers. Though they are unable to match the Psycho Rangers at first, the other Space Rangers show up and together, they bring down the Psychos. Later when Psycho Pink claims the Savage Sword, Andros and his teammates take the helm of the Astro Megazord one last time and help the Galaxy Rangers destroy the last of the Psychos.

Andros begins working on tracking down the remnants of the Machine Empire and finds them on the moon where they are attempting to bring back Serpentera. He sends Tommy Oliver a message about what is going on and they recruit 8 other Red Rangers, Jason Lee Scott, the Red Mighty Morphin' Ranger, Aurico, the Red Alien Ranger, Theodore T.J. Johnson, the Red Turbo Ranger, Leo Corbett, the Red Galaxy Ranger, Carter Grayson, the Red Lightspeed Ranger, Wesley Collins, the Red Time Force Ranger, Eric Myers, the Quantum Ranger, and Cole Evans, the Red Wild Force Ranger, and go to the moon in a new Astro Megaship with Alpha 7. There they take on the Machine Empire Generals and succeed in destroying them and Serpentera.

Andros is a skilled hand-to-hand fighter and possesses telekinetic powers, typical of people on KO-35. With his Astro Morpher, he can morph into the Red Space Ranger

increasing his fighting capabilities and giving him access to an arsenal of weapons and gadgets, which consisted of

The Spiral Saber, a sword based weapon with a drill blade, which could be combined with the Astro Blaster to form the Spiral Saber Booster Mode.

Andros is somewhat aggressive and impulsive. He also prefers to do things on his own, resenting the need to ask for help from others. His time living alone in space and difficulty in understanding the ways of Earth has made him distant from other people. Despite these flaws, Andros is brave-hearted and kind, more often than not putting the needs of others before his own and would willingly sacrifice himself to save others. 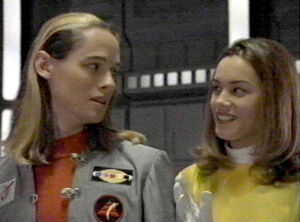 Andros with his girlfriend, Ashley 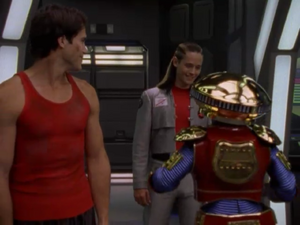 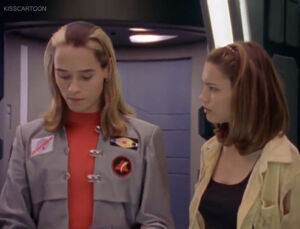