High King of the Alliance

Anduin possesses the ability to wield the light, enabling him to heal, protect, and resurrect his allies.

To make peace in the world of Azeroth.

Live up to his father's name and titles.

King Anduin Llane Wrynn is a central protagonist in the Warcraft franchise. Following the death of his father, King Varian Wrynn in World of Warcraft: Legion, he was crowned King of Stormwind and the High King of the Alliance.

The son of King Varian Wrynn, ten-year-old Anduin was given the crown to maintain order when Varian disappeared en route to a diplomatic conference at Theramore Isle; however, real power resided in the hands of Highlord Bolvar Fordragon, the Regent of Stormwind, and Lady Katrana Prestor, the Royal Advisor. King Varian's disappearance was a closely-kept secret, and his sudden "return" (later proven to be an impostor) was treated with skepticism by both Anduin himself and other leaders, such as King Magni of Ironforge. He was also captured by Onyxia because he was seen as a threat to her plan to overthrow Varian. He was freed by Valeera Sanguinar and Broll Bearmantle with an army of Stormwind Knights including his father, Varian Wrynn. They slew Onyxia, and Anduin's father regained his former self. Valeera Sanguinar is also known to have taught Anduin his excellent dagger skills. She is also known as a bodyguard to him.

Wrath of the Lich King

During the Wrath of the Lich King Beta test, the only change to the Stormwind Throne Room was the addition of the throne itself. Anduin stood in front of it at his usual spot.

Anduin currently stands at the side of his father, who has returned from his long absence. Anduin now has the title "His Highness Prince Anduin of Stormwind".

During the novel, The Shattering: Prelude to Cataclysm, it is confirmed that, despite his best efforts and those of his Dwarven mentors, Anduin simply does not take very well to the arts of combat. However, he is an excellent archer and knife-thrower due to his steady hands. In fact, his steady hands have found much use, as he excels at medical and the healing arts. He was called upon several times during the shattering to tend the wounded and bring comfort to the distraught. The Holy Light responds well to him, and he feels such a natural affinity to it that both King Magni and High Priest Rohan suggested Anduin may have a more fitting calling as a Priest. Rohan became his new mentor, at least for a time. Anduin went on to impress even members of the Horde with his levelheadedness and genuine concern for the well-being of all peoples, a stark contrast to the attitude of his father.

It is suggested that Anduin will not follow his father's path and become a warrior of Stormwind. Rather, he feels a connection to the light and may become a priest. This decision is encouraged by his friend and 'uncle', King Magni, when he is given the mace Fearbreaker as a gift.

As part of the escalating war between the Alliance and the Horde that extended to the continent of Pandaria, Anduin was captured and held prisoner at Grookin Hill, east edge of the Jade Forest.

Anduin refused his father's order to return to Stormwind, believing strongly that the Alliance's future was tied to that of Pandaria. After landing, paths were set into motion that helped fulfill Lorewalker Cho's vision of the future, chief among them the fall of the Serpent's Heart. Anduin vowed to remain in Pandaria until he had helped set things right.

He worked with the night elf Sentinels to understand the mysteries of the pools within the Vale of Eternal Blossoms. He was also instrumental in the Alliance's dealings with various factions. He secured the trust of the August Celestials to open the gates to the Vale, focusing on a mission of peace and helping the refugees of Kun-Lai Summit find a place of safe haven.

Anduin can be found in various zones as both a quest giver and receiver, ultimately finding his way to the Shrine of Seven Stars in the Vale. Anduin was badly injured after Garrosh shattered the Divine Bell in Kun-Lai Summit, crushing the young Prince under the debris. Afterward, he spent considerable time at the Tavern in the Mists, recovering from his injuries. During his stay at the tavern, Anduin passed his time by playing a pandaren board game with Wrathion, learning much from him about the history of Pandaria, and the necessity of the Horde and Alliance joining together to repel a major assault on Azeroth, predicted to occur sometime in the near future.

Although only a teenager, Stormwind's prince, Anduin, has persevered through numerous trials and tribulations, such as being kidnapped by the scheming black dragon Onyxia. His greatest challenge, however, might lie in his relationship with Varian. Anduin is no stranger to his father's love and affection, but he is constantly wary of sudden outbursts from Varian's violent, gladiatorial side. Anduin has also struggled against his father's insistence that he become a warrior.

Events just prior to the Cataclysm signaled a new chapter in Anduin's life. While undergoing martial training in the dwarven bastion of Ironforge, Anduin witnessed as Moira Thaurissan—the estranged daughter of the late King Magni Bronzebeard—held the city hostage with a contingent of Dark Iron dwarves. Despite being the legal heir to Ironforge, she drew the ire of Varian for her heavy-handed tactics. Before long, the king and a team of SI:7 agents infiltrated the city, intent on killing the brash dwarf heiress. Only through Anduin's wise and resolute intervention did Varian stay his hand and spare Moira's life, thus averting a political disaster that might have ignited a dwarven civil war.

During his time in Ironforge, Anduin also discovered his true calling in life: to be a priest devoted to the tenets of the Holy Light. For those who know Anduin well, this discipline is a perfect fit for the prince, who has consistently proven himself to be compassionate and thoughtful. No longer the child-prince of Stormwind from years past, Anduin is fast becoming his own man with the courage to speak up for what he believes in. He does not share Varian's outright hatred and mistrust of the Horde. On one occasion, he even imparted sage advice to the tauren chieftain Baine Bloodhoof after the death of his father, Cairne. Yet in Azeroth's current state of turmoil, it is unknown whether Anduin's destiny with the Light will proceed on its current course, or whether his path will take a different turn. 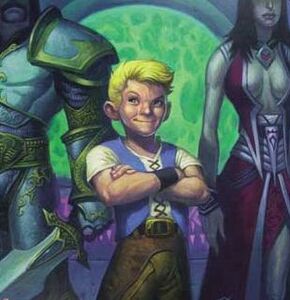 Anduin as a boy. 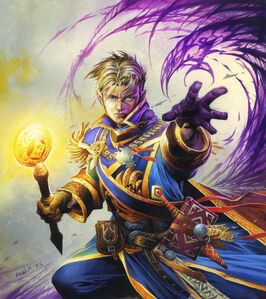 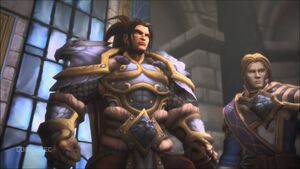 Anduin standing next to his father, King Varian

Anduin's portrait in the Legion cinematic. 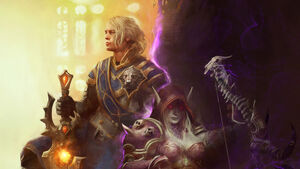 Anduin on the cover of the novel World of Warcraft: Before the Storm. 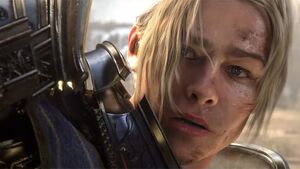 Anduin in the Battle for Azeroth cinematic. 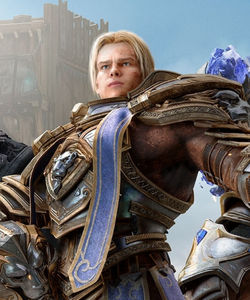 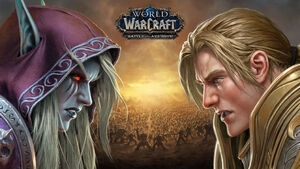 Anduin and Sylvanas on the cover of World of Warcraft: Battle for Azeroth