Stop Black Hole from taking over the Wars World.

Strategist
Andy is an Orange Star CO and the main protagonist of the video game Advance Wars and its sequel Advance Wars 2: Black Hole Rising.

Once the Blue Moon forces have been driven out of Orange Star, Andy along with his partner Max move their forces into Blue Moon, in the process having to travel through Yellow Comet. Assuming threat of invasion, the Yellow Comet Emperor Kanbei declares war on Orange Star but Andy and Max repel his forces as well.

Andy and his Orange Star forces later move through Green Earth, where Andy runs into Eagle again as well as his fellow Green Earth CO Drake and learn that Eagle is hostile towards Andy because it was reported that Andy led an unprovoked Orange Star attack against Green Earth's troops.

However, Andy and several others begin to suspect that something else is going on and that someone else is responsible for Blue Moon's invasion into Orange Star.

Their theories are confirmed with the reveal of Sturm and Black Hole being the true instigators of the war, having gotten the other nations to declare war on Orange Star by having Clone Andy carry out false flag attacks on the other Wars World nations to provoke them into declaring war.

Black Hole's machinations uncovered, Andy and COs from each of the other nations lead their forces to go and stop the threat of Black Hole. After defeating the Black Hole Army in the final battle of the game, peace is restored and Andy and Eagle become friendly rivals instead of enemies.

When Sturm returned with four other Black Hole COs to conquer each of the Wars World nations, Andy his fellow Orange Star COs fought to repel the Black Hole invasion of Orange Star spearheaded by the CO Flak. He later joined COs from each of the Macro Land nations in leading a final attack on Black Hole.

Andy appears as a sticker that give a boost on indirect attacks power by 6 to any fighter.

Andy appears as a advanced primary grab spirit. His spirit battle is on the ship deck portion of the Halberd stage against Dr. Mario that can be healed in at high damange and eight tiny Snakes 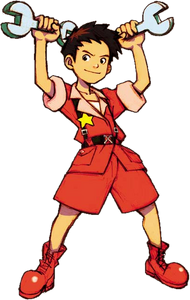 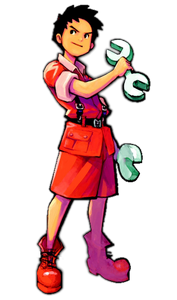