Andy Barclay is the main protagonist of the 2019 science-fiction horror film Child's Play, He is the arch-enemy and former "best friend" of Chucky.

He was portrayed by Gabriel Bateman.

Andy is first seen playing on his phone in the apartment hallway. He is met by Mike Norris who becomes acquainted with him. He returns to his apartment room to find his mother has given him an early birthday gift, a used Buddi doll, whom he attempts to name Han Solo but it auto-corrects to Chucky. Andy then shows Chucky his room and then goes to bed but Chucky bothers and creeps him out by singing the buddi song.

The next day Andy gets ready for school and notices Chucky is copying what he does before stating to Chucky he will be back. He returns home surprised to see that Chucky was waiting for him the whole time. Chucky gives Andy a gift of a broken stick. When he notices that his mother's boyfriend Shane at his home, he picks up Chucky and leaves.

He talks with Chucky about how he dislikes Shane because he is abusive and that he will just leave them eventually. But Chucky states he will never leave him, much to Andy's joy. The duo bond over a game of cards but he drops a card near his cat, Mickey Rooney, who scratches him Andy goes to clean up the blood only to return to find an angry Chuckie strangling the cat because he hurt him Andy explains to Chucky that he can’t hurt people just then Shane walks in the Room and ridicules Andy. The next morning, Andy decides to use Chucky to scare Shane. As he tells his doll the plan, he is met with two other tenants of the apartment, Falyn and Pugg, who become interested with Andy due to his strange but fascinating Buddi doll. The trio decide to prank Shane and upload the video. They then show off Chucky to the other kids in the apartment building more notably Omar who tries to get Chucky to take a pen and stab a stuffed unicorn but he declines. Later Andy and his friends Watch the film Texas chainsaw massacre two Chucky how much they enjoy the movie so he tries to make Andy happy By grabbing a kitchen knife to do a reenactment of the movie nearly killing Pugg much to Andy’s horror and confusion. To make it up to him Chucky pranks Shane again promptings Andy’s mom to ground him and limit his time with Chucky and locks him in a closet. The next day Andy returns from school to find that Chucky has killed The cat to stop it from hurting Andy again later that night Chuckie teases Andy by playing the audio of him murdering the cat over and over again whole he is trying to sleep. 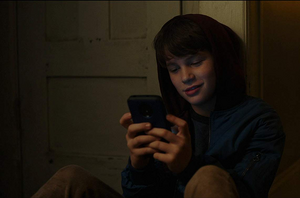 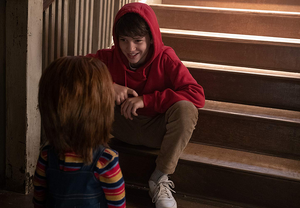 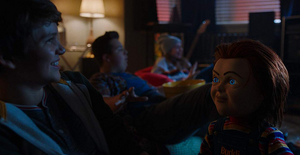 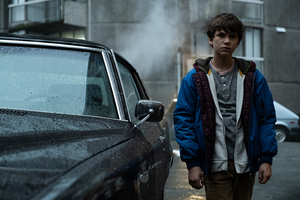 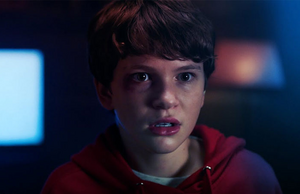 Andy with Pugg, Falyn and Omar.
Add a photo to this gallery

Retrieved from "https://hero.fandom.com/wiki/Andy_Barclay_(Reboot)?oldid=1824947"
Community content is available under CC-BY-SA unless otherwise noted.