Heroes Wiki
Register
Don't have an account?
Sign In
Advertisement
in: Male, In Love, Horror Heroes,
and 16 more

Survivor of the Rage Outbreak

Running from the Infected and exploring London.

Find their mother Alice and become a family together in District One (failed).

Andy Harris is the younger brother of Tammy Harris, he is one of the main protagonists of 28 Weeks Later. He is played by Mackintosh Muggleton.

Andy and Tammy were at school back in 2003 and luckily got a trip to Spain during June, missing the events of the Rage epidemic. They were thus lucky to survive the Original Outbreak.

During the time they were in Spain, their district was quarantined and Tammy said it was a disgusting camp. During this time, their father Donald Harris was in Sandford near London, hiding from the Infected. However, when his wife Alice let in a young boy from Sandford who was also fleeing the Infected, hordes of the Infected attacked, and the boy got Infected and chased Alice. Donald cowardly jumped out of the window and abandoned Alice leaving her presumably to die.

When Andy was allowed to return to Britain with Tammy and other original inhabitants, Donald had risen to be caretaker for District One, in the Isle of Dogs in London, the only safe zone in the entire country. The United States Army had taken over much of the city of London and was rebuilding it.

Andy saw much of this as he was taken by train with Tammy to District One. He was perturbed by the armed guards which Tammy assured him were only for their safety. Upon arrival, Andy heard a medical officer outline the rules for life in the zone, such as that at no time were anyone allowed beyond the zone boundaries. Andy at least took this in.

Upon arrival at the platform, Andy was the first to see Donald and ran to meet him. When they all reunited, Donald got them up to his floor, no problems, using his ID card to override security to get there given his right as caretaker. Donald then explained he had bad news about their mother Alice. He told them an outright lie that Alice was killed by the Infected when all that had happened was Donald saw her being dragged away with no clue as to her fate. He pretended she was dead to make himself feel better but Andy was devastated by the news.

Overnight, Andy had a nightmare where Alice turned into an Infected.

Tammy suggested they go back to their old house outside London despite the high risks and immediately Andy said they ought to have told an adult. Tammy said come on it's an adventure and they slipped under the bridge and ran into London, not after being seen by Sergeant Doyle who radioed Flynn to alert him of two "puppies."

After finding a derelict pizza store where its courier had been killed by an Infected long ago in the Original Outbreak, Andy showed his courage by bravely waiting in an abandoned, eerie smashed up London street while his sister Tammy also very bravely snuck in to get the bike keys off the corpse. Upon starting the bike, off they went.

They did successfully find their old house, and immediately found a photograph of their mother Alice with both of them. Andy was satisfied and, pleased at being back, went outside to jump on the trampoline yelling for Tammy to join. Tammy was downstairs and didn't hear. Andy then went back inside and heard a noise up in the attic. Again he showed his courage by boldly going up. It was pitch black in there as the electricity had been cut for days in the country, and also the room stank of old food and clothes. Andy held up his nose in disgust as he went in. A movement caught his eye and he backed away, believing it to be an Infected somehow evading combat, but he was shocked to find his mother, Alice, alive.

Alice was relieved it was her son Andy so she grabbed him and hugged him. However her grip got very tight and Andy began shrieking in pain. This time, Tammy heard, and ran up and got Andy out of the grip. However, Tammy saw her mother in her confusion and then the US Army came in and quarantined Alice, taking her back to District One in the sunset.

At District One, Tammy was angry about Donald's deception and Donald somehow blamed Tammy for deceiving him. Such was his mental state he went to visit his wife, breaking all quarantine rules, and when he kissed her, Donald immediately became Infected. He began an epidemic, eviscerating his own wife, and then killing numerous soldiers he came across. He Infected Weise, the guard to Andy and Tammy's cell, but Weise was killed by Doctor Scarlett before he could kill the children.

Tammy and Andy were released by Scarlett, who rushed them out and told the guards that both of them - especially Andy - had a possible cure to the Infection and thus their lives were top priority. As Donald broke in and Infected citizens, a wave of Infected grew to epic proportions, who all fell upon the Army. Doyle tried to comply with the Code Red order - destroy all Infected, then, if that fails, destroy all life - but when he had Andy in his sniper sight he couldn't shoot a child. So Doyle quit the Army out of disgust. ("Fuck the Code Red fuck the chain of command.") Doyle met with Scarlett (who he fancied) and Tammy (who fancied him) and Andy met with all of them later in the warehouse as the battle between Infected and the Army continued. As the shooting became sporadic, Sam, a citizen, said maybe it was safer that the Infected were under control. ...Or, maybe this means there's no one alive left to kill.

Andy then impressed the others by sacrificing his life by running across the sniper's line of fire outside the warehouse. Doyle was impressed and congratulated Andy, but Andy saw his Infected father watching him in the shadows.

Over night, the United States NATO bombed District One, in the hopes of killing all the Infected, but they failed - large numbers escaped to Regent's Park. This group of Infected chased Sam, Scarlett, Doyle, Andy and Tammy. When they arrived at the Park that dawn, Sam looked for rescue but was disgusted. Andy asked if Alice was still alive, Tammy said not this time, having by now learned to expect the worst in such an epidemic.

Andy said they stay together, whatever happens.

Immediately, Flynn arrived in his helicopter and Doyle begged him to take Andy and Tammy because of their cure. Flynn said to meet him at Wimbledon Stadium. Then he tried to fly off but Sam jumped on in fear because of the crowds of attacking Infected. Flynn decapitated many Infected in the Park and Sam fell off and got Infected too. Then Andy, Tammy, Doyle and Scarlett legged it out of the Park to an abandoned car. When it wouldn't start, Doyle bravely sacrificed himself to start the engine as two soldiers brutally incinerated Doyle.

Now as Scarlett drove through central London despite being shot at by the sniper's helicopter, she evaded him by going into the pitch black Underground. Hunted by Donald Harris through the darkness, the trio fell downstairs amidst the corpses, and Donald appeared and beat Scarlett to death.

In this case, Andy bravely made his way round the Underground, seeing Donald move past swiftly at one point. But when he looked again there was no one there.

When Andy went out to look, Donald rushed at him, knocking him over, and then grappled his shoulders and vomited Rage Infected blood on Andy's face, effectively Infecting his son.

Tammy ran up and cried out and Donald glanced up, then ran at her, to kill her, but Tammy shot her father in the shoulder. He shrugged it off and ran again at her but she shot him in the head and he finally died.

Amazingly, Andy was not Infected - his eyes were not the same colour thus were apparently immune to the Infection, yet still got darker bloodier pigmentation.

Tammy confirmed Andy's well being to him and they headed off to Wimbledon Stadium, where an angry Flynn asked where Doyle was. Tammy said it was just them. So Flynn reluctantly accepted them both as per Doyle's last wishes and Flynn took them out of England across the Channel to France.

...And A Whole Other Month Later

A month after this, the chopper is found abandoned in a field. It is unknown how this happened or what happened to the crew, but three likely scenarios are:

Andy seemed to be very close with his sister Tammy to the point where it was almost slightly incestuous.

Mainly, though, Andy was heroic, pure hearted, and although a poor judge of character, like his father Donald, he was always able to survive his mishaps and come out OK, unlike Donald, who never faced responsibility to admitting he abandoned his wife whereas Andy took responsibility by telling Tammy he saw their father Infected straight away. 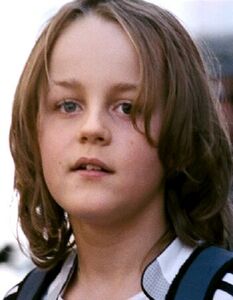 Andy with a very lustful expression 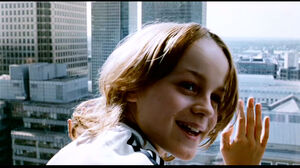 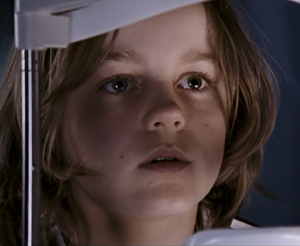 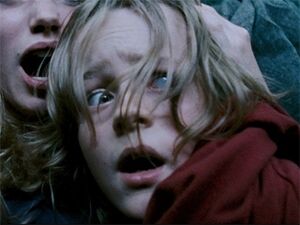 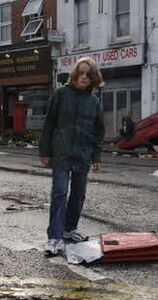 Andy standing outside the pizza place in London 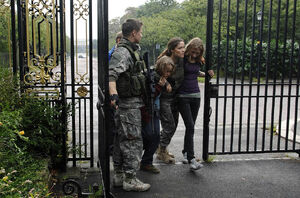 Andy on the center left he is the small figure by Doyle
Community content is available under CC-BY-SA unless otherwise noted.