Various (depending on the cartoon)

Spending time with his Papa

To be Woody Woodpecker's best friend (both succeeded)

Mischevious Hero
Andy Panda is the deuteragonist of the animated series Woody Woodpecker.

Andy is an anthropomorphic young panda who was created by Walter Lantz in 1939 where he first appears in Life Begins for Andy Panda. He frequently appears with his father whom he tries to serve as a role model for Andy and is often the fall guy for Andy's pranks. In the 1940 cartoon Knock Knock, Woody Woodpecker made his first appearance as he pecks holes through Andy and his father's roof and after a couple of tricks, Andy successfully traps Woody by pouring salt on his tail and two other woodpeckers come to take Woody to the insane asylum, but prove to be as crazier than he is.

He appears in more cartoons, and started to wear clothes. In The Painter and the Pointer, he was malicious as he threatened to kill his dog with a shotgun for moving and messing up his painting and the studio disliked his personality and it was never shown again.

His last cartoon short in his series was Scrappy Birthday (1949) where he tries to find his girlfriend Miranda Panda a fur coat for her birthday, but failed instead finding a skunk and using it's fur for a fur coat and scaring her off.

Andy also appeared a few times with Woody in a few cartoons and made appearances in comics and has his own series with Charlie Chicken as his pet.

He returns in Woody Woodpecker (2018), where he is voiced by Scott Weil and has a more mature voice and makes appearances on the show. 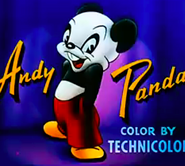 Andy Panda in the comics.