Andrea Lee Wilcox, commonly known as Andy, is the main protagonist of the webcomic Daddy's Girl, written and illustrated by Mike MacDee

Andy is a gifted martial artist and a trained masseuse with a reputation for getting into fights almost everywhere she goes. She is tall -- around 5'10" -- with a lean and athletic figure. Her hair is short, black, and usually unkempt. She is covered in scars, most notably the three-point scar on her left cheek, and a smaller, matching scar on the left side of her chin -- scars she (accidentally) received from her abusive mother Brandy. She typically dresses in boyish clothes, usually baseball tees and flannel shirts, never going girlier than a sports bra or a sleeveless tee. Just like her father Garrett (and unlike her little sister Josie), she speaks in crude English with traces of an indeterminate southwestern accent.

Andy is a reactive protagonist: as a disciple of Aikido -- and as a result of having accidentally killed a man in a fight when she was fifteen -- she tries to avoid all forms of conflict unless absolutely necessary, even if it results in people walking all over her. However, she sometimes has trouble controlling her temper, and on some occasions will gladly enter or even start a brawl, even though it always makes things worse for herself. She is not an untouchable martial arts movie badass whose actions have no consequences: every fight gets her in trouble with police, family, employers, and/or more hoodlums, even when the violence is justified. Despite her near-legendary prowess as a mixed martial artist, Andy is very sensitive and sweet-natured, and has an unnatural talent with dogs. She loves martial arts films and sports, is an excellent marksman, and is fluent in Spanish and Japanese (Osaka dialect).

Based on her fighting style, Andy's primary martial arts are Aikido and Muay Thai kickboxing. She often subdues her opponents with joint locks and throws, sometimes using the environment as a weapon, or turning her attackers' weapons back on them. She also heavily utilizes her knees and elbows like a Muay Thai boxer. Her speed, awareness, and skill allow her to take down several attackers at once, and even disarm those who menace her with guns.

At fifteen, Andy accidentally killed young black hoodlum Tyler Hessee in self-defense; though she was in the right, her own history of violence convinced the judge to send her to a juvenile correctional facility for anger management. She has difficulty making friends due to the Tyler Hessee incident, having been sensationalized as a racist killer by the Arizona media. Making matters worse, she is easily recognizable thanks to the scars on her face; most people know her by sight many years after the event, and often avoid her or start trouble with her on the assumption that she committed a hate crime and basically got away with it.

Andy herself is the plot of the webcomic, as the central themes revolve around different aspects of her troubled past: her guilt over killing someone, and the fear of it happening again; her inability to recover from her father's tragic death; her resentment toward her mother, who physically and emotionally abused her as a child, and whose pettiness destroyed her father in an unnecessarily messy divorce; and her fear of following in her father's footsteps by dying uselessly in a brawl.

Andy is forced to face these issues when she gets into a bar fight with Bethany Bryant, not realizing she is a prizefighter in the employ of money launderer Geri Kildare, who had Beth slated for a profitable fight that weekend. Geri tries to recruit Andy as a replacement, eventually giving her an ultimatum: either she works for Geri as a fighter, or Josie works for her as an unwilling bondage porn star. Andy agrees to fight and wins the match, despite coming away with several fractured ribs and a swollen eye. When she learns that she accidentally killed her opponent, Lizzie Branco, Andy is left shaken and morose. In the end, she finally accepts her capacity for killing when she deliberately ends Geri's life during a showdown.

The story's conclusion is ambiguous, with Andy beginning a trial facing three counts of homicide. It is implied that, with her mother's help, she might beat the rap and avoid prison time.

andy in the hospital.

Fifteen-year-old Andy flees a night club with her sister Josie. 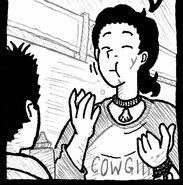 Andy has a voracious appetite: her food tends to vanish between panels.
Add a photo to this gallery

Retrieved from "https://hero.fandom.com/wiki/Andy_Wilcox?oldid=1082794"
Community content is available under CC-BY-SA unless otherwise noted.