Heroes Wiki
Register
Don't have an account?
Sign In
Advertisement
in: Movie Heroes, Animals, In Love,
and 28 more

Angel (Lady and the Tramp)

Buster's girl, Baby, Angel Cakes, my girl (by Buster; which she detests)

Angel is the girlfriend of Scamp and the deuteragonist of Lady and the Tramp II: Scamp's Adventure. She was once a special dog, but was abandoned many times by her owners for various reasons, including moving, allergies and having a baby. Angel helps Scamp survive the mean streets and the junkyard and teaches him to put away his selfishness. The two of them become lovers and help each other out. She doesn't hesitate to stand up to Buster, and can take care of herself. Her personality is reminiscent of Annabeth Chase from the Percy Jackson and the Olympians series.

She is voiced by Alyssa Milano (Susan Egan, singing).

Angel is first seen chasing the Dogcatcher with the Junkyard Dogs and throwing the Dogcatcher's hat; she then sees Scamp through a fence and nuzzles with him. Later on, she meets Scamp in an alley where they sniff around and talk to each other. Angel also shows Scamp a trick where she jumps on a row of trash cans, which he tries to imitate unsuccessfully. She then takes Scamp to the Junkyard, where he meets the Junkyard Dogs. Buster, the Junkyard Dogs' leader, then tells Scamp that before he can make him a "Junkyard Dog" he'll give him a "test" to show that he's brave enough. The test is to retrieve a can from Reggie's alley. However, Scamp ends up waking Reggie up. The Dogcatcher shows up and tries to catch Reggie in his net, but catches Angel instead, and Scamp saves her, which she thanks him for. Although Buster is impressed with Scamp, he decides that he needs to take another test before he can join the Junkyard Dogs. Later that day, the Junkyard Dogs reveal to Scamp that a dog named Tramp (who is Scamp's father) who was once best friends with Buster. Fed up with Sparky's false tale of Tramp's fate, Buster reveals the real version of why Tramp left the Junkyard Dogs: He fell in love with Lady, which Buster considers a betrayal to their friendship. He stresses how angry he was that Tramp didn't follow the rules.

At night, Scamp goes to a railroad track and Angel follows him. She tells him the story of how she was abandoned by all of her previous five families because they either moved, had a baby or were allergic to dogs. Then a train comes their way and they run out of the way, But Scamp gets his paw stuck in the tracks. Angel goes back to help him, and both of them fall into the water below. Angel yells Scamp's name in concern and is relieved when he shows up unharmed. Angel and Scamp then realize that they are in love. They take a romantic stroll in a park and share a spaghetti dinner in the same restaurant that Lady and Tramp had one in in the first film. They then go to the street where Scamp lives, and when they look through the window of the Browns' house, they see that Scamp's family misses him. Angel calls Scamp out for abandoning a family that loves him, as she herself has been in five families before.

The next day, at the Fourth of July celebration, Buster is seen watching Scamp's family from the bushes and realizes that Tramp is Scamp's father by seeing that they scratch in the same manner. He then tells Scamp that for his "final test" he wants him to wreck their picnic and steal their chicken. Scamp does so to prove that he isn't a house dog. Buster then leads the Junkyard Dogs to wreak havoc on the celebrations and then meets up with Scamp and Tramp in a dead end alley where he confronts Tramp over betraying their friendship and falling in live with Lady. Buster then convinces Scamp to abandon his father, which Scamp does, leaving Tramp depressed. Buster then officially lets Scamp join the Junkyard Dogs by removing his collar.

Later, when Angel confronts Scamp on choosing to be a Junkyard Dog instead of returning to his family, Scamp accidentally reveals Angel's secret wish to have a family, and Buster kicks her out of the junkyard. Angel finally stands to Buster and tell her that she is not his girl and she no longer wants to be with him.When Scamp looks for Angel, Buster thinks Scamp wants to become a house dog.

Later that night, Scamp looks for Angel, having realized his mistake of telling the other Junkyard Dogs that she wants to be in a family, only to be captured by the Dogcatcher and abandoned by Buster. Angel sees Scamp in the back of the Dogcatcher's van after he caught him, and goes to his family for help. Tramp and Angel run to the dog pound to rescue Scamp.

Tramp is able to rescue Scamp from Reggie, who was in the same cage as Scamp. The Dogcatcher then appears, but Angel defeats him by biting his behind, causing him to hit a wall and get knocked out in his attempt to shake her off. After escaping the dog pound, Scamp, Tramp, Jock and Trusty go back to the junkyard, where Scamp retrieves his collar and gets revenge on Buster by trapping him underneath a pile of junk. The other Junkyard Dogs, who decide to find families of their own, ditch Buster, leaving him alone and run along to Jim Dear's house. Scamp returns home with Angel and is welcomed back by his family. Although reluctant at first, Jim Dear and Darling decide to adopt Angel after being bought over by their dogs' sad expressions. Angel is last seen watching Scamp take a bath with Annette, Collette and Danielle as Darling puts a pink bow on her neck. 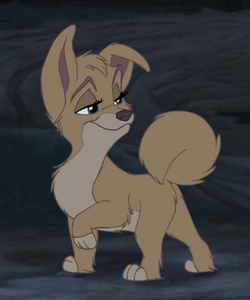 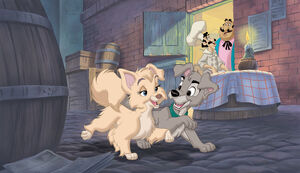 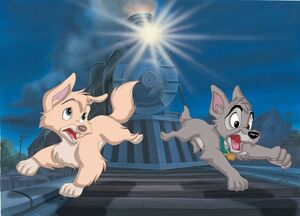 Angel and Scamp, running away for their lives from a train 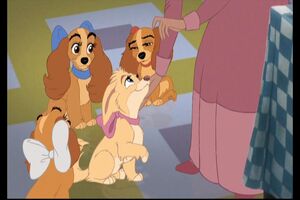 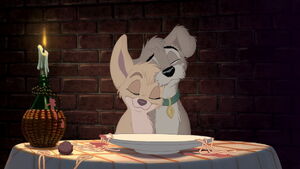