Angelic Deity
Angel is a classic character within the Tekken series of fighting games. She is Kazuya Mishima's good counterpart, and wants to get rid of her evil counterpart, Devil.

When Kazuya Mishima was thrown off a cliff by his father, Heihachi, the devil gene activated within him. Devil appeared and offered Kazuya the ultimate power he needed to defeat his father Heihachi, in exchange for his soul. Kazuya, driven by anger and revenge, accepted Devil's offer. Since Kazuya met Jun Kazama, another entity was created within Kazuya known as Angel which represented all that was good within him. Angel represents the "good" version of Kazuya's Devil Gene. She fought to save Kazuya's soul from Devil, and failed at her attempt.

According to her name, Angel is good and calm. It was stated that she tried to save Kazuya's soul from Devil. 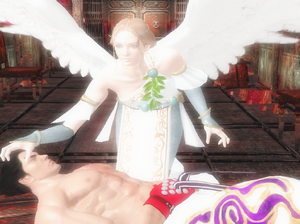 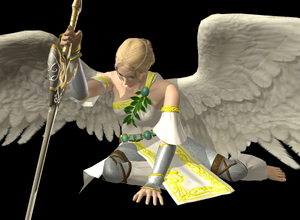