Bullying Fluttershy and others around him.

Get what he wants.

On & Off Spoiled Brat
Angel, or Angel Bunny, is a recurring anti-hero of My Little Pony: Friendship is Magic. He is a male rabbit and Fluttershy's pet. He is somewhat spoiled and bossy towards Fluttershy on occasion; however, he does care about her and actually displays an intention to help her stand up for herself. Most of Angel's actions are played simultaneously with instrumental jingles.

Angel is first introduced in The Ticket Master, where he snatches the tickets to the Grand Galloping Gala away from Spike and gives them to Fluttershy. When Fluttershy is too shy to explain why she wants to attend the Gala, Angel thumps her hoof with his hind leg impatiently, making her explain herself. He later appears in Golden Oak Library, making a salad for Twilight Sparkle while Fluttershy cleans and tidies, in order to persuade Twilight to give the extra ticket to Fluttershy. She tries to tell Twilight that she was cleaning up because they were good friends, before turning to her rabbit friend, whose stern look reminds her of the original intent of providing a special favor in order to receive a ticket.

In Dragonshy, Angel is seen in the opening happily eating a carrot until Fluttershy comes about and warns him to not eat too fast. He then refuses to eat at all and later shows Fluttershy a big black cloud in the distance. Later, when Spike announces that he will look after Fluttershy's animal friends, Angel hops on Spike's head and stomps furiously. This causes Spike to flinch and have all the animals around him scurry away. At the end of the episode, Spike catches Angel just to drop him on his head to make a note to Princess Celestia.

In the beginning of A Bird in the Hoof, he reminds Fluttershy to go to Princess Celestia's welcome party until she remembers and then convinces her to go despite her nervousness. The scene makes a reference to the White Rabbit from Alice in Wonderland, with Angel apparently possessing a pocket watch that he uses for calling Fluttershy's attention to the time. Fluttershy then quotes the White Rabbit from Disney's Alice in Wonderland saying that she's "late for a very important date." After Fluttershy repeatedly thanks Angel for reminding her, he shoos her outside every time she returns to thank him, even going so far as to lock her outside.

Angel is one of the bunnies who get their legs elongated in The Return of Harmony Part 2, and when the rabbits stampede over Twilight Sparkle, the corrupted Fluttershy congratulates him and says that she's very proud.

In May the Best Pet Win!, Angel and Fluttershy attend their friends' weekly "Pony-Pet Playdate."

In Baby Cakes, Angel and Fluttershy are about to go on a picnic when the Cakes ask Fluttershy to babysit. As the Cakes leave her cottage, Pinkie Pie begs them to let her babysit while cradling Angel in her arms.

In Putting Your Hoof Down, Angel has a much more spoiled and short-tempered personality. He is shown to be very picky, wanting a salad perfect to the last detail instead of the carrot salad given to him. At the end of the episode, Angel still refuses to eat the plain carrot salad Fluttershy had previously given to him and throws a small tantrum when the now assertive Fluttershy doesn't give in to his demands as she normally does. Instead, Fluttershy uses the "Stare" on Angel, who immediately calms down and reluctantly proceeds to taste a slice of cucumber. He finds the taste to his liking and rapidly devours the bowl's contents.

From Hurricane Fluttershy onwards, he returns to his much more sympathetic and supportive attitude towards Fluttershy. In the aforementioned episode, he comforts her after she runs away from training and oversees her own personal training as her coach. In Ponyville Confidential, he angrily refuses to let the Cutie Mark Crusaders talk to Fluttershy after their gossip about her alleged tail extensions reduce her to tears, but changes his mind when he sees their apologetic article.

In Too Many Pinkie Pies, Angel is seen having tea with Fluttershy, then having a picnic with her and her other animal friends.

In Keep Calm and Flutter On, he finds himself constantly tormented by Discord when he decides to crash at Fluttershy's cottage, such as taking his favorite spot on the couch. He later warns the others of the flooding at Sweet Apple Acres.

In Just for Sidekicks, Fluttershy asks Spike to petsit for her in exchange for a large jewel. Neither Spike nor Angel is happy with the arrangement, but the former goes along with it anyway. Angel is apparently fond of having his tail fluffed a certain way, and doesn't trust Spike to get it done, spending the whole episode with his tail in curlers. He also shows genuine affection for Fluttershy, nuzzling up against her as the girls are saying their farewells. He spends much of the episode tormenting Spike, running away from him constantly, and eventually ending up on a train to the Crystal Empire. Angel tries to reunite with Fluttershy as they're boarding the train for home, but Spike recaptures him. He then attempts to blow their cover when they're trying to hide, but changes his mind when Spike admits his faults in neglecting the pets throughout the episode, and even finally getting his tail fluffed. Angel even retrieves Spike's last gem and feeds half of it to him so that his growling stomach doesn't give away their hiding spot.

In Magical Mystery Cure, after Twilight convinces Fluttershy to feed her rambunctious animals both to save Rainbow Dash and restore her memory, Angel gives her a loving hug.

In Castle Mane-ia, Angel accompanies Fluttershy as she goes to Princess Luna and Princess Celestia's old castle in the Everfree Forest. Once there, they are separated, and Angel ends up running into Twilight and Spike in the castle's ancient library.

In Rainbow Falls, Angel briefly appears with Rainbow Dash and Bulk Biceps. In Filli Vanilli, he encourages Fluttershy to sing with the Pony Tones. Angel also appears in It Ain't Easy Being Breezies, in which the Breezies take his bed.

In the episode Maud Pie, Angel appears with the rest of the Mane Six's pets meeting Pinkie's older sister Maud Pie. In Testing Testing 1, 2, 3, he portrays Princess Celestia in a play to help Rainbow Dash study for her Wonderbolts Reserves test.

In Castle Sweet Castle, Twilight helps Fluttershy give her animal friends some baths. Fluttershy encourages Twilight to go home and give herself a bath, but to avoid going to the castle, Twilight pushes Angel in the mud to give him a bath as well. Later, Twilight dries Angel off way too much that he turns into a fuzzball.

In Do Princesses Dream of Magic Sheep?, Fluttershy grooms Angel at Carousel Boutique. In Fluttershy's dream, Angel appears as a giant bunny and brushing Fluttershy's hair, and the nightmare magic of the Tantabus turns him into a giant, monstrous rabbit. Fluttershy later tames and uses evil Angel in Princess Luna's super dream to fight the Tantabus.

In Scare Master, Angel is among Fluttershy's animal friends that assists her in preparing for her Nightmare Night solitude. Although, he expects carrots as payment, and since Fluttershy doesn't have any at the cottage, she is forced out into Ponyville to search for some. After Fluttershy unsuccessfully attempts to scare her friends to prove to them that she could make Nightmare Night fun for them, Angel assists Fluttershy in expanding the maze at Sweet Apple Acres in an effort to successfully scare them.

Angel attends Fluttershy's book club in The Hooffields and McColts. During the session, he points out to Fluttershy that her cutie mark is glowing because the Cutie Map at the Castle of Friendship is summoning her. He leads the book club in Fluttershy's absence.

Fluttershy brings a stuffed animal replica of Angel on the train to the Crystal Empire on the way to Flurry Heart's crystalling as a gift on The Crystalling - Part 1.

In No Second Prances, Starlight Glimmer cuddles with Angel, and after she leaves, he appears to have fallen in love with her.

In Flutter Brutter, when Zephyr Breeze moves in with Fluttershy, he brings along a rabbit-shaped lawn gnome, which Angel at first becomes jealous of, but then seems to befriend, before Zephyr takes it away.

In 28 Pranks Later, Angel appears with Fluttershy in the Everfree Forest and pretends to be a zombie as part of an elaborate prank against Rainbow Dash. In Every Little Thing She Does, Angel appears among the rest of Fluttershy's animal friends during Starlight's friendship lesson with her.

In Fluttershy Leans In, Angel fractures his foot while attempting parkour and receives medical care from Dr. Fauna. He later helps build the Sweet Feather Sanctuary with Fluttershy and her friends.

In School Daze - Part 1, Angel acts as one of Fluttershy's practice students. In part 2, Angel hugs a deeply depressed Twilight to try and cheer her up, but when he fails, he becomes saddened himself. In Fake It 'Til You Make It, Angel participates in Fluttershy's picnic at her sanctuary.

In Grannies Gone Wild, Fluttershy takes Angel to the Carousel Boutique to be measured, but Rainbow Dash, while explaining about the Wild Blue Yonder rollercoaster to Fluttershy and Rarity, carries Angel on her back while she imitates the ride itself.

In Marks for Effort, Angel briefly appears at the Cutie Mark Crusaders' picnic where he eats Cozy Glow's carrots. He also appears about to be fed by Fluttershy at her cottage. In Yakity-Sax, Angel helps Fluttershy pick flowers in the forest, but when they find Pinkie playing on her yovidaphone, she plays it so poorly that Angel covers his ears with fluff from his tail. Later, when Pinkie is playing her yovidaphone in Ponyville, Angel hides under a basket with his ears tied around his head, and is alerted by Fluttershy when Pinkie leaves. Angel later appears at a tea party hosted by Fluttershy at the Sweet Feather Sanctuary to try and cheer Pinkie up.

In Sounds of Silence, Fluttershy mentions to Applejack that she can understand Angel's feelings compared to the Kirin only making answers to yes-or-no questions. In Father Knows Beast, Angel tries to rest on a pillow, but Fluttershy takes it away to give to Sludge.

In Teacher of the Month, Angel is shown in a flashback, starting off Fluttershy's "clean-up dance party" by switching on the record player with a kick. He later appears in the present, enjoying Applejack and Rainbow Dash's "student appreciation day" party.

In The Beginning of the End - Part 2, Angel is mentioned by Fluttershy when she begins to worry about him being put under King Sombra's mind control. In Sparkle's Seven, Fluttershy explains to Spike that her fear of tight spaces is because of her separation from Angel in Castle Mane-ia.

In She's All Yak, Angel appears helping Fluttershy, Rainbow Dash, and Rarity in teaching Yona how to dance. In Between Dark and Dawn, Angel appears alongside Fluttershy as Princesses Celestia and Luna fix the Ponyville bridge.

In She Talks to Angel, after Angel and Fluttershy get into a heated argument, they are given a potion from Zecora that makes them understand each other. 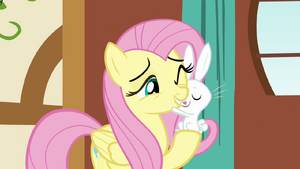 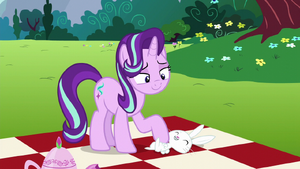 Angel being tickled by Starlight Glimmer.

Angel in My Little Pony: The Movie. 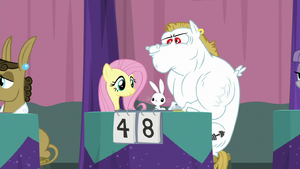