Skills in sex and combat

Doing to drugs.
Flirting with others.
Pulling pranks.
Drinking.
Pissing off Vaggie.
Starting fights (with Cherri Bomb by his side).

Angel Dust is a spider-demon. He is about eight feet tall and wears long dark pink thigh-high boots. His pupils are pink, and his scleras are light yellow in the right eye and dark pink in the left eye. His skin/fur is white, with some light pink dots on his hair. He has a large bust sticking out of his white and pink-striped suit. He also wears a dark pink bow-tie, a choker, 4 pink gloves and black shorts.

When he is a drag queen, his hair is longer, due to him wearing a wig. However, in art Vivienne has done, he tends to put highlights or patterns in his hair whenever doing drag as well. 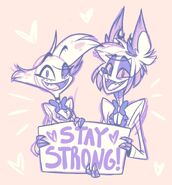 Retrieved from "https://hero.fandom.com/wiki/Angel_Dust?oldid=1923652"
Community content is available under CC-BY-SA unless otherwise noted.