Angela is a character from Disney's Gargoyles. Appearing in the second season's Avalon arc, she was one of the surviving eggs of the attack on Wyvern Castle that was taken by the Magus to the magical kingdom of Avalon for safekeeping. She is revealed to be Goliath and Demona's biological daughter.

She is voiced by Brigitte Bako.

Angela is an attractive tall, slender gargoyle with long brown hair worn in a ponytail. She has inherited her father's lavender skin complexion and hair color, although her features are closer to Demona's. When Angela left Avalon, she wore a one-piece conservative outfit, but had later changed her outfit to a more provocative two-piece white loincloth, reminiscent of Demona's typical style. This change on her part was made to express her growing up and pursuing her adult relationship with Broadway.

Angela is the gentlest and most innocent member of the Manhattan Clan, although she remains somewhat naive long after coming to New York. She views harmony between humans and gargoyles as natural (thanks to her upbringing on the peaceful isle of Avalon), and thus cannot understand why the humans of New York fear and hate her clan so much; it bewilders and grieves her. She is very trusting and kind, and has a good judge of character.

From Anton Sevarius, Angela learned that Goliath is her biological father, and the relationship between them changed to uneasy; Angela wanted Goliath to accept her as his daughter but Goliath stuck to the Gargoyle Way of raising their young and because being a parent was foreign to him until Diane Maza helped him better understand parenthood and the bond with one's children, and he accepted Angela as his daughter, to her happiness.

She eventually learned her mother is Demona, and expressed several times to Goliath she wanted to try and change her. Goliath had tried to keep them apart because he didn't want Angela to be hurt by Demona.

To Angela's joy, she found her mother did love her, but to her heartbreak, Demona manipulated her in the hopes of eliminating Goliath and swaying Angela to her side. Angela was driven to tears and rejected Demona's apologies.

She was raised on Avalon like a human, thus making her more willing to trust others and joined the Manhattan clan in the middle of the second season. 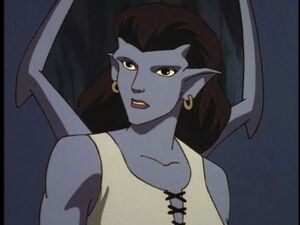 Retrieved from "https://hero.fandom.com/wiki/Angela_(Disney%27s_Gargoyles)?oldid=1830407"
Community content is available under CC-BY-SA unless otherwise noted.