Strolling around Altena.
Trying to learn how to use her magic successfully.

Learn how to get the hang of controlling her magic.

Angela, titled Rebellious Princess of Altena, Kingdom of Magicians, is one of six main characters of Trials of Mana, which previously only released in Japan as Seiken Densetsu 3. She is the rebellious princess of the magical kingdom of Altena, located in a region best known for its cold climate, snowy fields, and ice caverns. She is the daughter of Queen Valda, also known as the True Queen of Altena, and the wise King Richard of Valsena, the latter of whom is served by fellow protagonist Duran.

She is voiced by Rumi Ookubo in Japanese and Sarah Miller Crews in English.

Angela is a young lady with long purple hair with a small hat and red leotard with what appears to be a red cape worn around her waist.

Angela is a brash, seductive, and lazy young woman who is prone to mouth off at people and view others as below her, and has very little care for the duties of her royal lineage, but deep down cares for her loved ones very much. She is best described as childish and rebellious, often desiring attention because her mother Valda has rarely had time for her. She often kept dodging on her studies to the point that not even her mother thinks she has any magical talents within her. Angela is also short-tempered and stubborn and tends to pout and throw fits when things don't go her way. She is lonely deep down, and would do anything to be acknowledged by her mother again, even vowing to fight against her if she deems it necessary.

The remake portrays her as a stereotypical spoiled princess, when in reality she struggles with her lack of magical talent as well as her rejection by her mother. Her English dub voice has her speak in a dialect that happens to be typical of Southern California.

Angela is the sole princess of the ice-covered Altena, the Kingdom of Sorcery, which is also the long-time ally of Valsena, the Kingdom of the Plains. Her mother, Valda, uses magic to keep the snow at bay to keep the Altenish citadel in a perpetual Spring, but like her country, is cold and unfeeling towards her daughter, making her lonely and selfish as a result of her upbringing. What doesn't help her disposition is that she is the only citizen of Altena who is unable to use magic.

Lately, the snow has started to encroach more and more on Altena as the world's Mana has started to fade, causing the True Queen's spell to weaken and causing Winter to return to the kingdom. To continue her spell and prevent Altena from freezing over, Valda, following the Crimson Wizard's advice, decides to invade the other nations and claim their Mana Stones, which, once done, would unlock the power of Mana within them and open the way to the Sword of Mana and its infinite power so that her spell would be able to continue. Unfortunately, the spells used to unlock the powers of each Mana Stone require a sacrifice when cast, and she decides she and the Crimson Wizard are far too important for such a thing, so she decides Angela should be the sacrifice for the Mana Stone of Water instead.

Upon learning this from her mother, a distraught Angela becomes so upset that she unwittingly uses her magic to teleport out of Altena and into the Frostbite Fields. As she traverses the snowfields, she soon succumbs to hypothermia and falls unconscious. Thankfully, she is found and saved by people from the Snow Hamlet Alrant, who nurse her back to health. Seeking counsel, she heads to the Inn near the house where she was recovering from the cold and finds Alrant's local fortune teller. Following her advice, Angela decides to head to the Holy City of Wendel where she can learn how to be able to get the hang of her magic.

Angela shares many story elements with fellow hero Duran, who lives in Valsena, Altena's long-time allied kingdom and one of the many nations that Altena tries to invade. If either hero is chosen as the main protagonist, the main villains will be the Crimson Wizard and his mater, the Dragon Lord, and the final dungeon will be the Dragonsmaw caverns.

Angela and Duran appears in Super Smash Bros. Ultimate as a ace support spirit first appearing in the "The Spirits of Mana" event, their ability is increasing the user's stats while badly damanged. Their spirit battle is on the omega form of the Gaur Pain stage against two tiny bunnies Kirby representing the Rabites, after defeating the two Kirbys, Palutena and Roy appears, representing Angela and Duran.

Being a mage, Angela has weak physical attacks, but her magic is very powerful. Despite not being able to use magic at first, she begins to learn spells from the Mana spirits that join her and the other heroes over the course of their adventures. Upon switching classes, she'll be able to have access to more powerful magic; her Light and Dark classes primarily allow her to use powerful Light and Dark magic, respectively. While her Light classes have a much larger focus on causing massive damage to multiple targets, her Dark classes focus more on damaging one target. 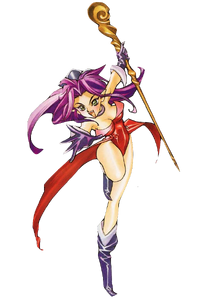 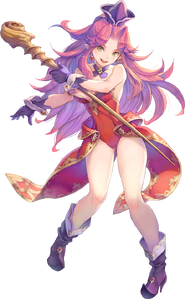 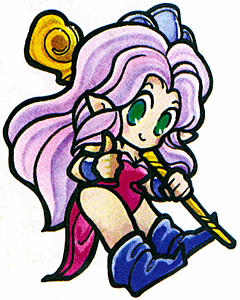 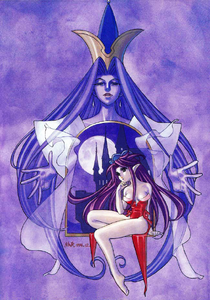 Promo artwork featuring Angela and her mother Valda, the True Queen of Altena. 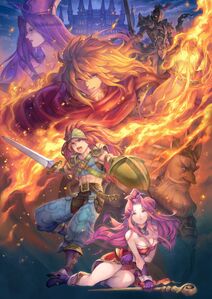 Promo artwork for the release of the Trials of Mana remake featuring Angela, the other heroes, Flammie, and Vuscav.

Promo artwork for the release of the Trials of Mana remake featuring Angela, the other heroes, and Faerie.

Promo artwork for the Trials of Mana Original Soundtrack featuring Angela and the other heroes playing musical instruments.

Promo artwork for Collection of Mana featuring Angela and the other heroes and the Mana Spirits from the first three Mana games. 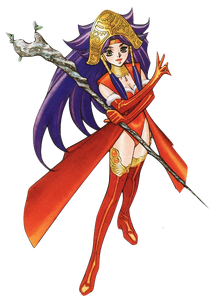 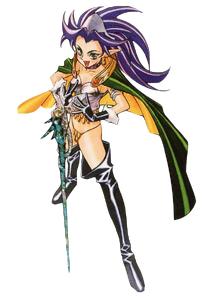 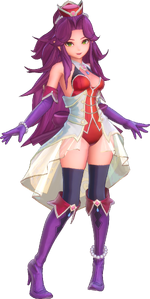 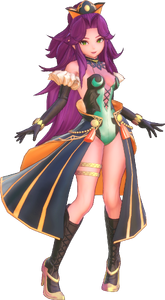 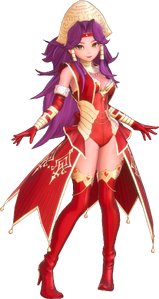 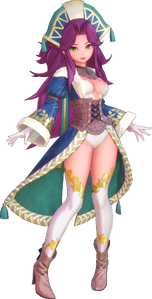 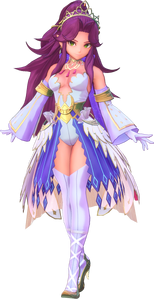 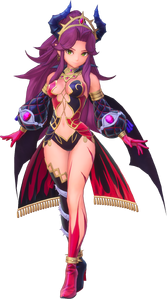 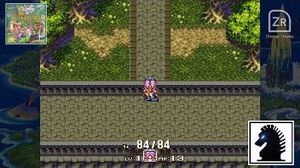 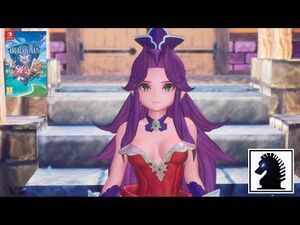