Hunter Angel
Wingless One
Hunter of the Heavens

Angela is a fictional major antagonist turned supporting character in the Image Comics series Spawn. She is angelic bounty hunter tasked with hunting down hellspawns and any of forces of darkness, but would become an ally of the hellspawn Al Simmons.

Angela first appears in Spawn #9 when she appears in was in a flash back when Medieval Spawn when Medieval Spawn tries to help her Angela reveals her true colors as an angel from Heaven sent to kill him and succeeds. Her origin is that she is many souls of fallen angel warriors merge into a single being and that she was initially unaware of her past lives until Deugars explains it to her. Deurges later tries to kill Angel, but she escapes. She would eventually meet the current Hellspawn Al Simmons and later fights him.

After the fight she meets up with her superior Gabreille who scolds her for failing. Angela would then on go on solo adventures until she was put on trial by Gabrielle for crimes she didn't do until Simmons rescued her and together they fell in love often helping each other side by side such as against the mighty Urizen and later fights Malebolgia together. Angela would die at the Hands against Malebolgia but her weapon Spawn uses to decapitate him. Angela's body was since taken by the angels and had not been seen since.

Thanks to the Trial between Gailmen and McFaralne with the former selling her to Marvel it is unlikely she would ever return.

In the marvel comics version she was Thor's long lost sister and that she in haven as a baker she would go on to become a warrior for the angels as she was kidnapped the by Queen of Angels who raised her to be among their ranks. Seemiling killed by the Queen for Odin meeting her demands He sealed away the angels. Angela later appears in Age of Ultron #10 as a warrior and later shows up in the guardians of the Galaxy revealing she was actually still alive and had been raised by Angels her entire life unaware of her true heritage. She would eventually meet her long lost family and joined them in defending the realms and later becomes a member of the Guardians of the Galaxy. She was also in love with a woman named Sera.

Angela is a skilled warrior and as a angel warrior possess flight, Superhuman Strength, speed, Stamina, and duradlibty. She is also a weapons master. 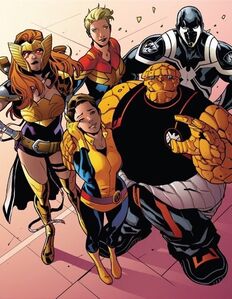 Angela with the Guardians of the Galaxy.